It’s tough to keep up with the good news for Ripple and XRP recently – sometimes even Ripple is surprised by sudden market developments.  I’m referring to Brad Garlinghouse’s reaction to an announcement by a large hedge fund founded and managed by Michael Arrington.1

“Arrington, who made his name in Silicon as the founder of the blog TechCrunch and as a venture capitalist, described the fund as a high-risk project, but says he is so excited about crypto-currency he plans to devote the rest of his career to it.”

“The news, which Arrington announced at an investor conference in New York, is significant because investors will buy shares of the fund and receive distributions in XRP. While dozens of hedge funds have sprung up this year to invest in the white-hot digital currency market, this one, known as Arrington XRP Capital, is the first to be denominated in a crypto-currency rather than dollars or euros.”

Once he heard about the press release, Brad Garlinghouse tweeted2: 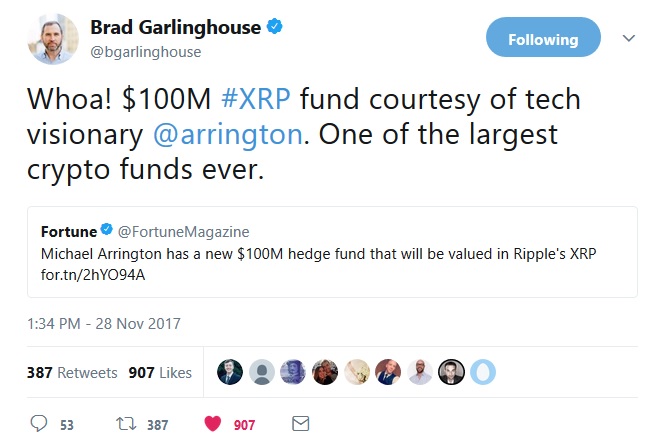 His reaction spoke volumes; while Brad Garlinghouse was understandably enthusiastic, Arrington’s announcement is one of the few funds that decided to make the jump towards XRP before the escrow announcement this month.  While unexpectedly early, it is most likely the first of many such announcements.

Personally, I think it is a wise marketing move by Arrington to be one of the first funds to capitalize on XRP’s growing popularity.

Volume is one of the key indicators for the health of a crypto network – much like a data point when we get our own health checkups.  When we go to a doctor for an annual physical, one of the tests is for blood pressure.

Like checking blood pressure on a patient, tracking the volume of a crypto-currency should be considered a standard practice for investors.  It indicates a rough measurement of demand and volume of trading, regardless of the ascribed price of the asset.  For XRP, the most recent three months average volume numbers tell an interesting story.

I went to coinmarketcap.com’s historical snapshots, and transferred down all saved dates from October to the present day.3  I then took the October and November snapshots and averaged them to arrive at a volume number to connect to each month.  Here is the volume chart: 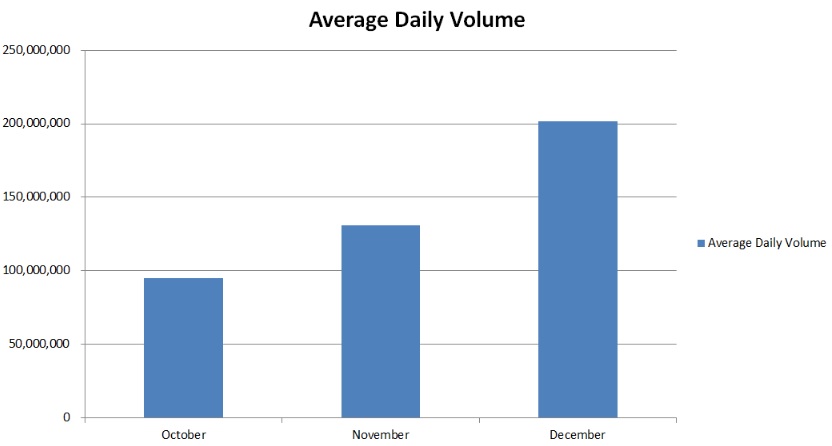 XRP Ledger volume is trending upwards dramatically.  Some recent days - those without any significant news announcements - have yielded a surprising amount of volume; in one case, a half billion dollars’ worth.

This chart clearly indicates that XRP is being aggressively purchased worldwide.

When the Bitcoin Segwit fork(s) were announced, it caused much market uncertainty throughout the summer of 2017.  In addition, these announcements were followed closely about new trade restrictions in China for ICOs and for Bitcoin – Renminbi trading.4 Both of these crypto news items caused negative shock waves to reverberate through crypto, scaring away new investment.

That trend has now reversed, and the lack of further code governance issues in Bitcoin has prompted investors to re-enter the market.  In force.

Some of those new entrants are hedge funds.

The announcement of a fund that accepts only XRP as payment caught many by surprise, including perhaps Ripple’s CEO.  For XRP investors, it was not the first official announcement of a major fund declaring its explicit interest in acquiring XRP, but it is among the first wave.

Funds that are entering the crypto market now – or soon – will benefit from early adoption.  The returns available to investors that are willing to risk purchasing some amount of crypto can be staggering - even coins and ICOs with questionable use cases are benefiting from a growing amount of speculative interest.

My Opinion on Crypto’s Ultimate Size

I think that crypto will plateau at some point, and I believe that it lies somewhere around 10 trillion dollars, approximately.  Why that amount?

To arrive at how big you think something should be, you have to draw comparisons.  The one market that I think may be a good benchmark?  The market for gold reserves and bullion.8 The following chart is dated somewhat, but you get some idea of the relative size of the current markets: 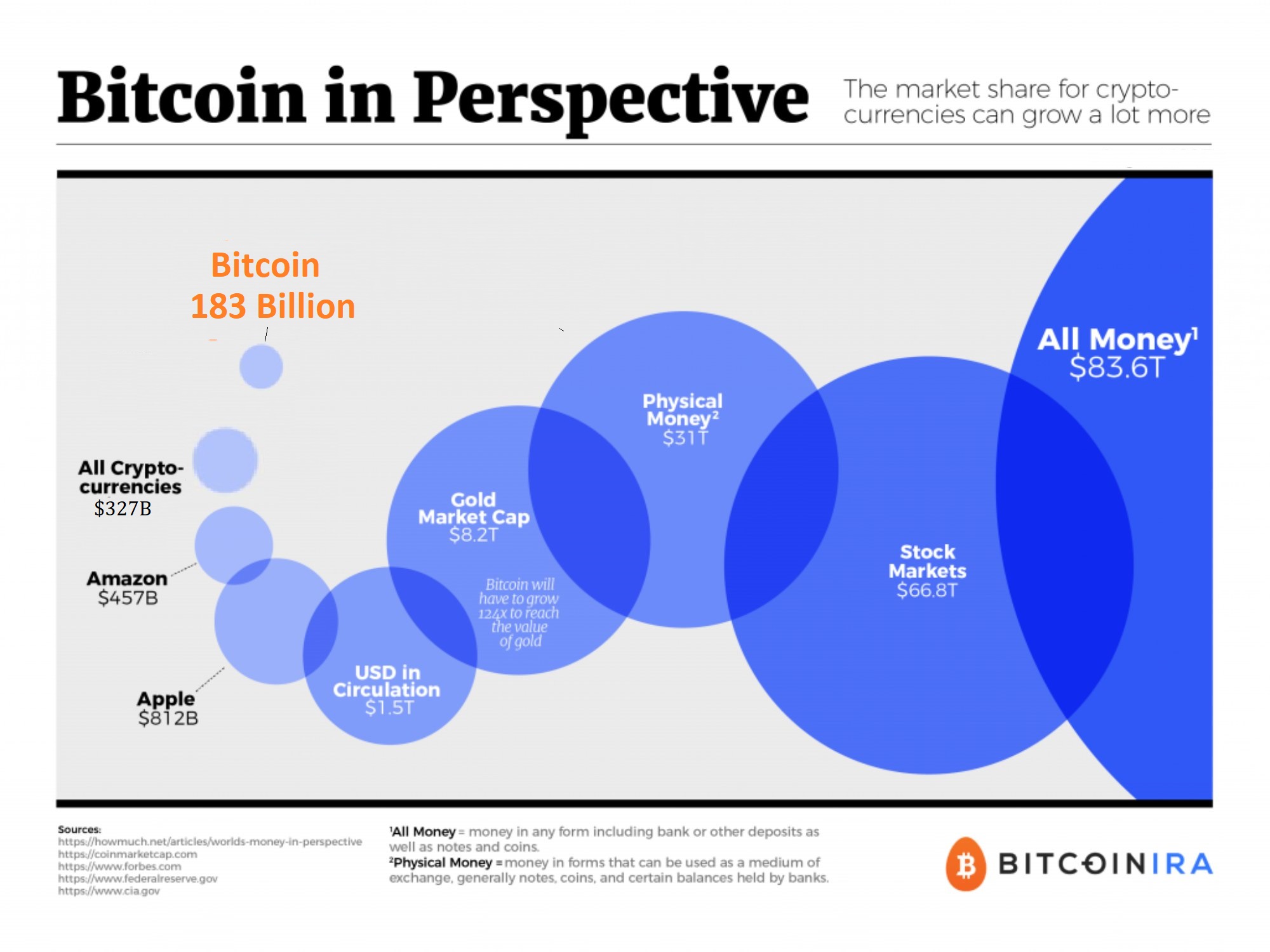 Why do I believe that the market capitalization of gold is the benchmark to use?  For me, it’s quite simple – with the new deflationary currencies available in crypto for anybody in the world to invest in, crypto-currency like XRP is going to quickly become the digital equivalent of gold.

To reach a similar size to gold market capitalization, the entire crypto industry would need to expand by a factor of 30.

We are not the only ones who know about this trend and these numbers.  While we are collectively regarded as early investors/adopters of crypto, the use cases for crypto are very speculative-based at this point.

Unlike the innovation of the Internet, it is not always readily apparent to industry leaders, icons, and CEOs of banks just what blockchain offers in terms of value.  It’s this hesitancy that has resulted in an adoption curve with a much-prolonged initial slope; Bitcoin adoption, other than as a speculative investment, is really more of a novelty even in 2017 for most retail uses.  While initial enthusiasm for Bitcoin as a retail currency was high, its 6-block verification requirement leaves customers and vendors cold.

Despite this delay in mainstream retail investing, progress is marching inexorably

forward.  We've reached a point where Bitcoin has become a household name.  XRP is almost there, and with the SWELL conference and more recent mainstream news coverage, Ripple's brand is rising in prominence.

While some hedge funds signaled their intentions9 towards crypto in mid-2017, others have recently joined the ranks and announced their plans to add crypto to their portfolios.  Among these include the Blockchain Strategies Fund, and Tobam, a company that manages $9 billion in assets.10 11

While 2017 broke records, from what I've seen, 2018 is poised to shatter those all time highs and turn them into distant memories of bargain prices.

XRP and Ripple are the Best Crypto Ambassadors

Unlike Bitcoin, XRP is not only a store of value.  In addition to quickly becoming a form of crypto gold in between trades, XRP boasts performance metrics that are far superior than that of Bitcoin – and any other proof-of-work network.

XRP can fully settle a transaction with 100% certainty in four seconds or less.12

The speeds I’m quoting are native protocol speeds, with no off-chain transactions.

It’s this type of real-world functionality that sets XRP apart and reveals Ripple, the company that created XRP, as the most qualified ambassador for crypto.  While some famous crypto personalities have a flair for making dramatic statements, Ripple has a history of pragmatic cooperation with existing banking infrastructure.

Ripple has a track record of viewing blockchain technology as just that – technology that can be used to facilitate a revolutionary change in the way that payments are made across the world. 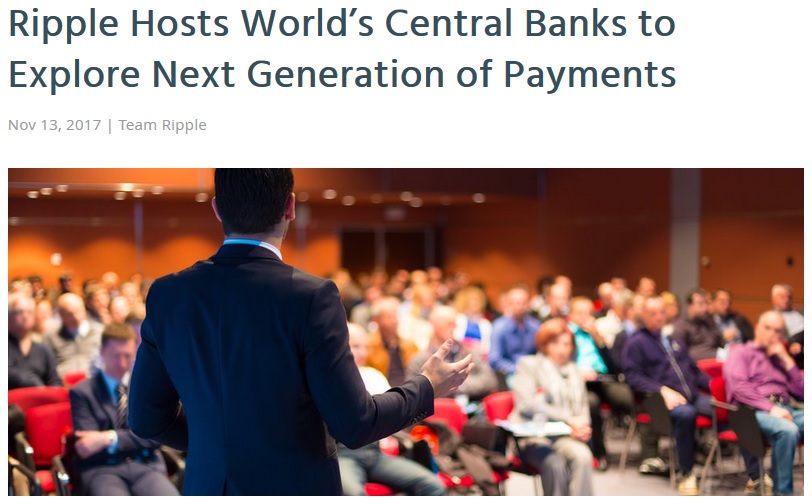 They recently hosted the Central Bank Summit on Blockchain, geared towards educating central bankers about crypto innovations.15  This conference was not only attended by the IMF; the IMF took the opportunity to present their own perspective on blockchain technology and crypto-currencies to the world's central banks.16

Conferences like this, and of course the SWELL conference, has positioned Ripple as the spokesperson/organization that the world is going to lean on for advice on how to integrate its existing infrastructure.  If they do things right and emphasize the importance of real-time payments, every country of the world stands to benefit from the increased velocity of money.  This is why the world will stand by for the time being and watch as crypto grows and establishes itself as a new form of democratized money and finance.

And it scares people.  Governments and agencies around the world are analyzing the developments in this new industry, attempting to grasp just what "trust-less, decentralized currency" means for their own fiat money.  The more forward-thinking central banks of the world are looking carefully at different approaches of issuing a state-backed crypto-currency or digital asset.17 18 Some of them are attempting to capitalize on being one of the first countries to realize benefits from a possible state-issued crypto.

Governments Will Watch – For Now

A democratized, deflationary currency choice given to citizens will result in one thing:  Citizens buying that currency instead of the one that contains inflation.

Right now, the bar to crypto investing is fairly steep in technical difficulty.  No, not for anybody that works in technology, but for the "Ordinary Joe" on the street?  Try to explain how to purchase XRP to a novice investor who only interacts with technology when they use their smart phone.  It’s not easy.  And it’s this learning curve that is one of the last remnants of an obstacle for traditional retail investors.

Once these retail investors can purchase crypto on exchanges and through their brokers, they will do so.

Even further; crypto has democratized finance.  No longer are vast sums of money raised solely through traditional exchanges based in New York.  Now, a small group of astute programmers can run an ICO from their living rooms, and raise hundreds of millions of dollars for new ideas.  This heralds a new movement across the world for non-traditional financing of organizations, businesses, nonprofits, and individuals.  It has enormous positive potential.

In a recent conversation, a friend of mine said the following:

“Once there is a bank where you can just transfer your money into crypto directly, everybody will use it.”

I smiled, realizing internally once again that crypto – and XRP – are still early.

Who's idea was it? Was it Chris Larsen?  Some visionary from SBI?  Who saw the potential for collaboration between Ripple and SBI Group?  Looking back on it now, the fit seems right.  SBI was one of the primary companies in Japan that saw the

It’s officially the holiday season for retailers, and online sales have now taken over brick-and-mortar’s traditional dominance.  Latest research concludes that “Cyber Monday” is more popular now than “Black Friday.”1  The “Amazons” of the world are now the ones profiting from