First off, it's not technically just a crypto-currency!

A typical crypto-currency is a cryptographic store of value that cannot be duplicated (or "double-spent") on its own distributed network.

Yes, XRP does this.

But it is also a digital asset as well, and has some special properties that you need to be aware of, especially if you're only familiar with proof-of-work systems like Bitcoin and Ethereum.  XRP can shift one currency into another.

This makes XRP what is known as a "bridge asset" in the ForEx industry.  Currently, the US Dollar is used as the predominant bridge asset for most ForEx trading, if a bridge asset is used at all.  This means that each bank or Financial Institution that wants to convert currency from one to the other has to purchase it on the open market and then store it in special bank accounts in other countries called "nostro" accounts.

Don't worry!  I'm not going to lose you in a heady discussion of nostro accounts.

Just suffice it to say that XRP allows banks to only hold one type of currency instead of dozens in their nostro accounts!  The money that banks can save by utilizing XRP as a bridge asset is estimated to be between 42 and 60 percent. 1   (42 percent with XRP at high volatility levels and 60 percent with low volatility). 2

It can serve as this bridge asset with extreme throughput and speed as well.  Here is a comparison of XRP's speed and throughput with Ethereum and Bitcoin: 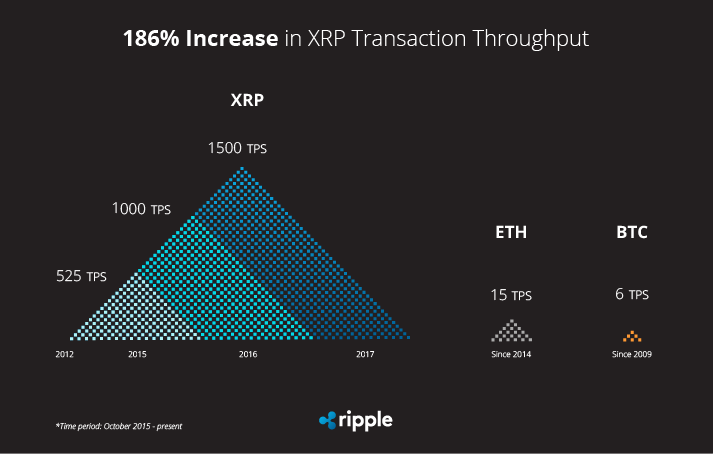 If you are familiar with Bitcoin and Ethereum, you might have some other questions as well; what kind of consensus algorithm does XRP use?  Is it a distributed network?  Can I run a validator node and be part of the network myself?  All of these are good questions.  Here are the answers:

The XRP Ledger uses a "Byzantine Consensus Algorithm" known as the "Ripple Protocol" to determine if a transaction is legitimate. 3 This requires a number of steps: This consensus algorithm solves a classical mathematical problem of trust known as the Byzantine Generals problem, and allows the state of the network to move forward with consensus. 4

Unlike centralized mining pools for both Bitcoin and Ethereum, this consensus algorithm allows the network to be secured with a minimum of electrical power, and much more quickly, as we've seen.

Because of its consensus algorithm, XRP doesn't require centralized mining pools.  This allows its network to truly be decentralized in a way that supports the redundancy provided by a distributed system.  It also saves an exceptional amount of electrical energy, and is categorically better for the environment than Bitcoin or Ethereum.

As a benchmark, Bitcoin currently is estimated to generate 2,000,000 metric tons of CO2 every year 5; also measured at between 15 and 16 TWh (Terawatt-hours per year). 6

Is it a Distributed Network? 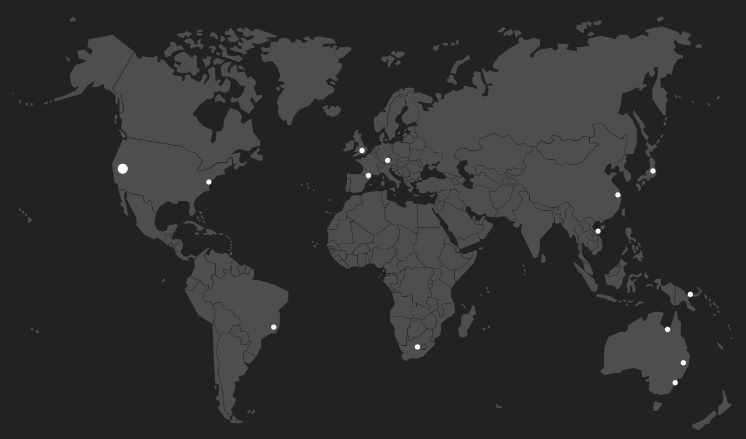 When it first began in 2012, the XRP Ledger was quite centralized, with most of the validating nodes being run only by Ripple.

Things have changed quite a bit since then, however, and now validator nodes are run throughout the world by businesses and organizations with a stake in the XRP Ledger's long-term health and success.  Ripple publishes an open record of its validators online as part of their Validator Registry. 7

Here is a sampling of organizations that run Ripple validator nodes:

Ripple has very high standards for becoming a trusted node, and carefully cultivates a healthy network of trusted nodes.  This network is slowly being further and further decentralized across the globe as more and more business partners emerge that wish to participate.

What About Individuals?  Can I Run A Validator?

Yes, individuals may also run a validator node and participate in the consensus process.  The validator list currently includes two of the cryptographers from Ripple, six XRPChat members (that I know of), and several hobbyists, as well as many others who have not given their names to the Validator Registry.

And it's simple to set one up!

Just make sure you have a computer that meets the hardware specifications, and follow the instructions for installation here. 17

As If the Technology is Not Impressive Enough...

Ripple is not just about XRP or the XRP Ledger.  You may have heard of the Interledger Protocol, or ILP - the protocol that enables all of the individual crypto-currencies to talk to each others' ledgers?

This was created by Ripple.  ILP was founded by Stefan Thomas and Evan Schwartz, both from Ripple.  18 19

Escrow can hold funds for a certain occasion or until a service has been performed. It can perform the task without the need to thrust intermediaries, meaning that no central authority holds the funds. Traditionally, banks accomplish this using a vault. Escrow is the first readily available option for digital assets.

This directly enables the escrow feature to be used by banks and other financial institutions.  (Or individual XRP holders!)  20

Payment Channels is an "off-ledger" transaction system that scales horizontally (linearly).  It essentially provides unlimited transactions per second, and some recent tests have measured its speed at 70,000 TPS just as a benchmark.  The target market for this capability is micropayments, but it can also support extreme high volume payments from any source. 21

Banks are adopting Ripple technology and the XRP Ledger.  Thus far, Ripple is supporting 90 customers among the worlds top banks, and are supporting over 75 deployments.  22 They've also recently updated their offerings to include liquidity solutions for banks and other financial institutions.

While many other fintechs are still in the "whitepaper" stage, Ripple is live in production, bringing the next generation of payment solutions to bear on a global scale.

Further Resources for Your Research

This blog post is intended to be a primer for those that are new to XRP and Ripple technology.  I've included many links in my "sources" below; in addition, here are some helpful links that have been used many times by others in learning further about XRP and Ripple:

XRP Community Links (for the latest news and discussions by XRP investors):

How to buy XRP:  How to Buy XRP

More about ILP, Ripple and XRP:

Various Desktop Wallets (Ripple can't directly provide a wallet due to AML-KYC): NOTE: Even though I use a couple of these options, I do not personally vouch for any of these wallets - please seek out references and use at your own risk.

Thank you for reading, and please share my blog with a friend!

Nobody talks about block size. And is it any wonder?  It's a heady topic, and XRP's performance metrics are so sexy in the other areas that bankers and financial institutions focus on.  Before I talk about block size, if you haven't seen the head-to-head