Who doesn't want to make money?

The meme "I'm into crypto for the technology!" has become a metaphor of the way in which a new technology can be championed - or compromised - by the corrosive influence of greed.

It's not an altogether bad thing;  many of us have made money on our crypto investments, and some traders make money off of the frequent volatility in the cryptomarket.   It's hard to argue with the potential of speculative investment involved in this new 'Wild West' of fintech.

But this unbridled enthusiasm, combined with greed, has made the cryptomarket a playground for something else, too:  The scams and the pyramid schemes.

Some of you may be snickering at this point, and commenting, perhaps in a quiet voice, "well, I'm too smart for those..."

The problem with that shallow thinking is an underlying assumption that only those of us with lower-tier intelligence are susceptible to becoming victims of these scams.   But that assumes that these scammers are playing on the rational parts of your thinking;  they are not.   They are appealing to emotion, and they sprinkle in a taste of convincing marketing, and may even pay out 'earnings' to some of the victims in an effort to convince others.

The schemes we're used to seeing on Twitter are the "Giveaway" scams.

These are the ones where an account is created by a scammer that uses the same exact image that a well-known Twitter personality uses.   The next step is for that new, impostor account to promote a 'Giveaway' of free XRP for a limited-time basis, or to only the 'first 100 people' that send in XRP, or some variation thereof.

This scam became so pervasive that some accounts like Vitalik Buterin felt it necessary to change their actual handle in an effort to remind Twitter users to be careful: 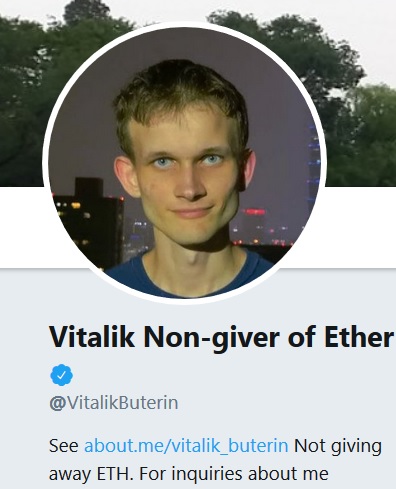 And the Ripple corporate account pinned its warning to its profile:

Over the months since early 2018, most of Crypto-Twitter has become relatively immune from these giveaway scams, but there have been a few individual cases where substantial amounts have been lost, even due to these types of efforts;  the appeal to greed and enthusiasm, as well as the use of images of trusted crypto community members, has yielded enough value for these scams to continue.

And then there's the pyramid scheme.

The business was propagated with incentives for referrals, which in itself is a standard business practice, but when combined with rewards related to an enterprise promising phenomenal returns, it can take an ugly turn.

Bitconnect eventually went out of business, with the company pointing fingers at any excuse that sounded legitimate.   The exit strategy involved the company repaying its investors not in the Bitcoin or USD originally sent, but with Bitconnect coins (BCC), whose value rapidly fell as it was distributed to pay off debts.  4

Why am I bringing up Bitconnect?

Because a new enterprise recently surfaced, touting something that its owners called an "Arbitrage Bot:" 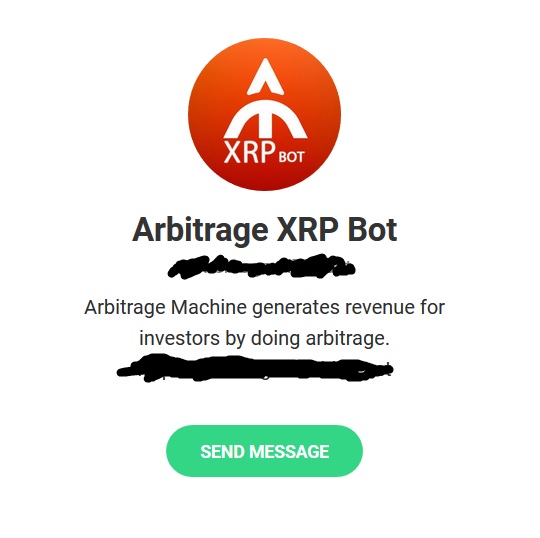 The preceding image is a link to a telegram channel which I've purposefully redacted to prevent even more people from joining.

The sales pitch is very reminiscent of Bitconnect, and it goes something like this:

It's that simple, and the daily returns discussed by the channel's owners are big enough to draw interest, and yet small enough to seem reasonable for those of us in crypto that are semi-familiar with technologies like bot trading.

But the problem is that the channel's owners have made claims that are unsubstantiated and unverifiable;  in addition, access to their social media platforms has begun to be problematic, signaling that their operation may be coming to a conclusion;  one that may involve a painful realization for investors.

If you are following XRP, and have seen this opportunity touted by your friends in the crypto community, I will not hesitate to tell you to stay far away from it;  this has all the hallmarks of a typical pyramid scheme, and the mathematics of the operation fail to pass any sort of rational analysis.   One XRP community member recently pointed this out in an effort to warn others: 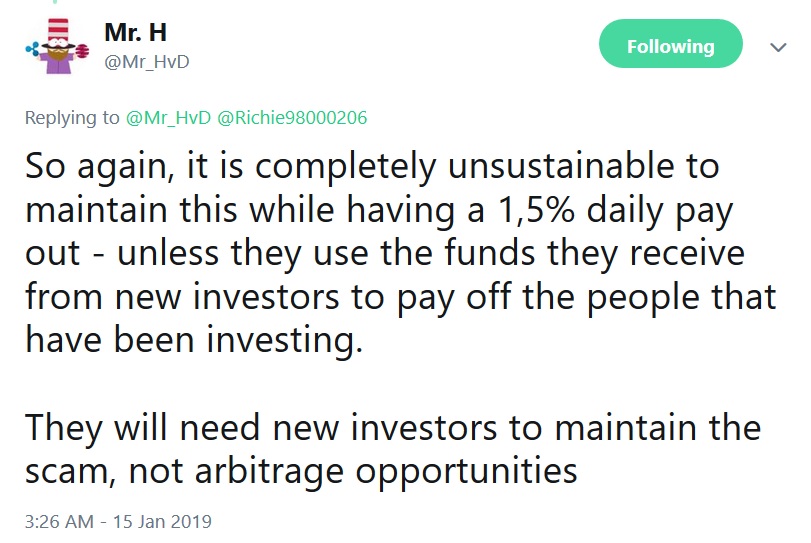 What @Mr_HvD (Twitter avatar) is hypothesizing is that of a "Ponzi" scheme, where new investors' money is used to pay the earlier investors.

This has the effect of making the earlier investors feel like the enterprise is legitimate and profitable.   This has the insidious result of motivating the earlier investors to naturally - and without any intentional malice - promote the opportunity to others in their close circle.   This normally includes the very people they'd never think of intentionally duping, such as friends or family.

In the end, however, it's these later investors who may be substantially harmed when or if the business suddenly exits, or the people running the social media accounts disappear.

Surprise: Smart People Can Be Victims

There have been a few experts that have studied the victims in various types of financial scams, and while some readers may snicker and think that they are 'too smart to be duped,' the data says otherwise.

According to data from the Financial Industry Regulatory Authority (FINRA) in the United States, those that fall for scams that involve investments and financial information are most often college-educated males between the ages of forty-five and sixty.   5

So, while it may make some other feel superior to deride or criticize the victim in these cases, or blame their lack of intelligence, that is not the case;  scammers have a set playbook that is consistent no matter if the topic is real estate, securities, or cryptocurrency.

One of their techniques is to appeal to the fear of missing out (FOMO).

When a new opportunity presents itself, part of our mind says "wait a second, I don't even know the names of the people running this operation..." But that voice can be quickly drowned out if it was a friend or relative recommending the investment, and they can prove their earnings by showing their own early pay-outs (see more information about the "ponzi" scheme).

The lesson here?   It's very simple:  Do not blame the victim.

The XRP Community isn't waiting around to see its members victimized further;  account information and the exchanges involved have already been tentatively identified by a small, volunteer group of individuals, including Thomas Silkjær.

And believe, me, Thomas Silkjær can track movement of XRP.

He is arguably the most skilled forensic technician when examining value flows on the XRP Ledger, and has been able to track down stolen funds on previous occasions with success.   In this case, he was able to follow transactions to two different end-points run by separate companies and exchanges.

Note that these companies and exchanges are not part of the group organizing the 'Arbitrage Bot,' and have been cooperative in the investigation thus far, as much as the law allows.

Thomas's investigation may lead to recovery of some funds, or it may not;  while the efforts are all-voluntary, the XRP Community has developed its own form of immunity to those criminals that would attempt to use it for nefarious purposes, or to scam our members.

My advice is to avoid the Arbitrage Bot and all of its 'copy-cat' variations!

The larger cryptomarket has a mixed reputation, due to the shoddy business practices of a subset of ICO organizers;  the enthusiasm people feel for crypto in general has enabled these disreputable practices, and it's up to us as a larger community to help each other put a stop to it.

Just like how we've combined our efforts to stop the 'Giveaway' bots on Twitter by reporting account impostors, we need to also be vigilant against any businesses that seem to offer unsustainable returns or 'guaranteed' profits.

In the burgeoning world of crypto finance, be cautious;  it's volatile and risky enough without these additional factors.   Let skepticism guide your decisions. 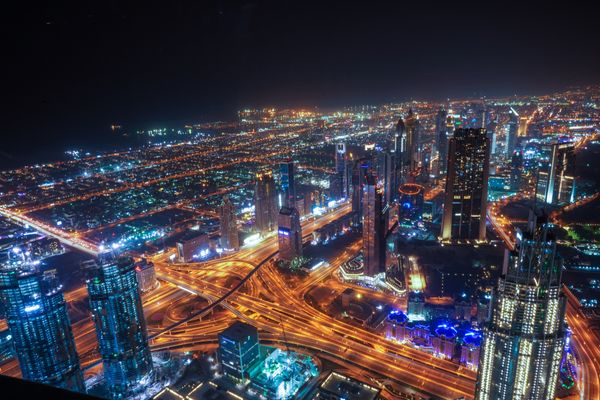 FAANG stands for "Facebook, Apple, Amazon, Netflix, and Google."   These five stocks have become staples in mainstream finance investing when it comes to large Silicon Valley power-houses.   Until 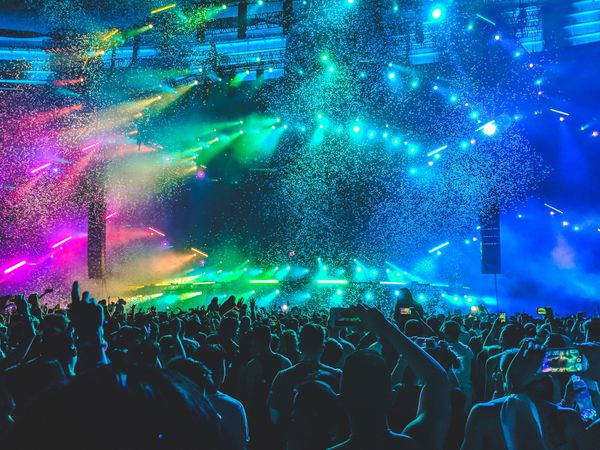 The big secret is out.   Yes, Ripple is led by the author of the Peanut Butter Manifesto, Brad Garlinghouse.   And in that famous communication to Yahoo executives, the current CEO