On Monday night, we in the West went to sleep after seeing the price of XRP rocket upwards, and when we woke up Tuesday morning, most of us found that the momentum had continued on the other side of the world, posting over a 20% increase in twelve hours.

Various news outlets feel the need to attribute the price increase to events that occurred directly before the surge, rightly or wrongly.   Some pointed to XRP's inclusion in the availability of exchange-traded-notes (ETNs) on a German financial exchange, while others connected it to Coinbase's approval to list XRP for sale on its platform in the state of New York.  1 2

I don't think either one is connected, and that the ongoing rally is instead an unavoidable release of pent-up pressure from XRP's continual growth in utility-driven sources of demand.

Ultimately, this latest price action is the type of performance that draws people to crypto in the first place as a speculative investment, and now the one digital asset with real business utility is finally getting its due.

Bakkt is a new enterprise owned and operated by Intercontinental Exchange, otherwise known as 'ICE' for short.   To apprehend why the cryptomarket regards this as a major step forward for institutional participation in crypto, you have to understand Bakkt's parent company.

ICE is a trading platform that emphasizes efficient settlement of trades, and the company has been on a quest for market expansion, acquiring numerous other entities whose business it is to provide data and services to major worldwide financial exchanges.   Their customer list is extensive, and includes the NYSE (which it owns), futures exchanges, OTC markets for energy, and central clearinghouses for financial instruments.  3

In ICE's earlier communications, they described their Bakkt enterprise as:   4

"...an integrated platform that enables consumers and institutions to buy, sell, store and spend digital assets on a seamless global network."

The project's scope of inclusion was vague, but did mention Bitcoin specifically.   In addition, the service will be used to facilitate futures contracts on cryptos.  5

One recent article indicated that the platform, after changing its go-live, had settled on July of this year for its debut, and would settle trades using Bitcoin instead of cash.  6   7

The impact on crypto, generally, from Bakkt's decision to go live with futures trading is expected to be a positive one, since institutions like to see a variety of competitors offer hedging products for volatile assets.   It's unknown what other specific cryptos will be supported on the platform, but it makes sense that XRP would be on the short list of considered crypto-assets, since it's the one preferred by banks, remittance processors, and other Internet companies like Coil and Omni.

My guess is that the project team will reveal more information as their July go-live draws near.

On Monday, May 13th, Ethan Beard, Ripple's SVP of Xpring Investments, tweeted about a new investment of $4 million dollars in a smart contracts company that specializes in agnostic, interoperable technology: 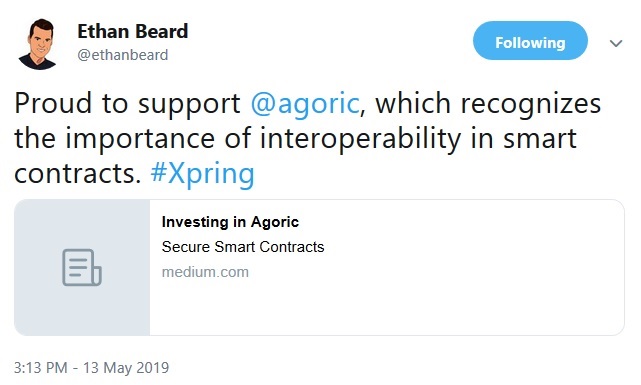 The link in his tweet leads to a blog from Vanessa Pestritto, Director of Xpring, regarding the thought process behind the investment.   She talks about why Agoric is a good fit for Xpring funding:

"The smart contracts market is growing and Agoric is well positioned to reach a broader market.  Agoric enables developers to safely build secure smart contracts and new digital assets that can connect to public and private blockchains.

They are focused on creating an interoperable smart contracts platform that is accessible to mainstream developers.

As members of the JavaScript standards committee, the Agoric team created subsets of JavaScript SES and Jessie.  Native JavaScript developers will be able to build agoric smart contracts in an accessible language."

The comment immediately indicated a continued focus on interoperability, and made me wonder how Ripple's Codius platform will fit into the overall strategy, as Codius also has an 'agnostic' approach for how to administer smart contracts.

In absence of additional clarification from Ripple, it's my guess that Ripple has a specific focus in mind for Agoric that will merge Codius into a combined, interoperable smart contracts platform, essentially creating 'Codius 2.0.'

But of course, that's all speculation until Ripple decides to release more information about the scope of this new, exciting focus on smart contract capabilities.

We've been hearing a lot of news lately about the approval (or sometimes denial) of requests to list ETFs and ETNs on regulated financial markets worldwide.

For example, Boerse Stuttgart, a large German exchange, approved the listing of ETN(s) for both XRP and Litecoin.  8   The announcement itself was exciting to hear, as it's an indication of how crypto is 'going mainstream' on many traditional investing platforms.

If we look closely at each of these financial instruments, however, are there key differences that would make us more enthusiastic for one over the other?

The Difference Between an ETF and ETN

If you directly own and handle custody of your XRP, either personally or on an exchange, you will probably prefer positive news about ETFs rather than ETNs.

An Exchange Traded Fund (ETF) actually purchases the underlying asset that it tracks, whereas an Exchange Traded Note (ETN) just tracks the performance of the targeted asset, but doesn't actually buy or sell the asset.  9

Because of this difference, if you want the demand for the underlying asset to increase as a direct result of the financial instrument listed on an exchange, it's generally better to have an ETF, because the fund will actually purchase that underlying asset.  10

This is why there is considerable excitement around the approval of ETFs for crypto-assets;  as the funds are approved for listing on regulated exchanges, the fund is then free to purchase and manage the underlying crypto.

There are other differences between the two types of instruments, such as tax treatment and performance tracking, but in terms of the effect on the overall cryptomarket, it's this key difference - that of ETFs directly increasing demand - that is the important one.

New York is the one state with the most stringent requirements for blockchain technology businesses.   While Coinbase is generally available for residents in New York, they only recently were formally approved to sell XRP in that state, and announced the development in a tweet on May 13th: 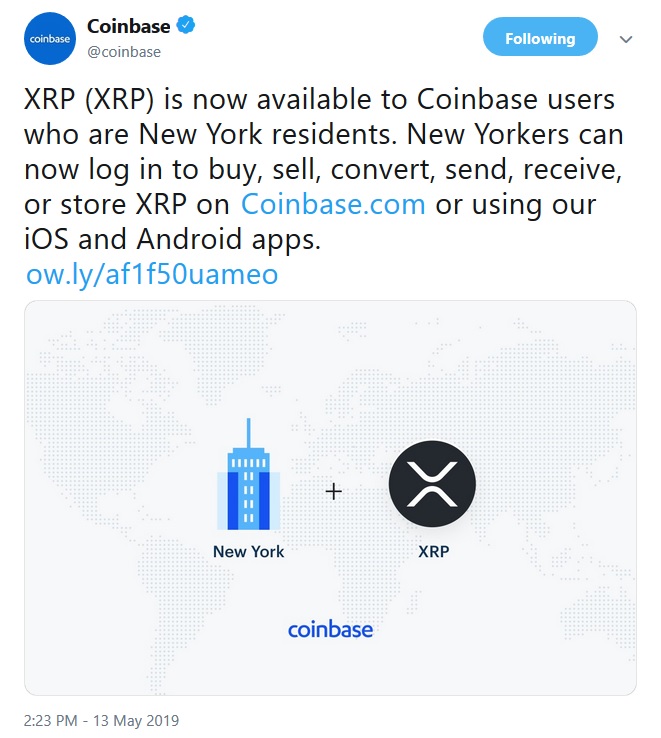 It's great that the final approval for XRP's listing on Coinbase has been obtained, as it's essentially the 'highest bar' for crypto operators in the U.S.

The Cryptomarket Waits For Nobody

Market activity for XRP and crypto is happening at a speed which is unsettling, even for those of us that have 'seen this before' in 2017 and prior years.   Gone are the lazy days of steady price behavior that can sometimes lull us into a false sense of safe boredom.

Instead, we are now seeing just how quickly the market moves to fix mispriced crypto-assets.   The market has taken the first tangible steps to correct its blindness to the one choice that has consistently recorded the highest levels of business adoption, whether it's by remittance processors, banks, sharing economy applications, or micropayment and monetization apps.

As XRP begins its unstoppable march to the top, the community can do its part by reaching out to new investors and educating them with the information that can help with practical matters such as interactions with crypto exchanges, custody of cryptocurrency, and just general knowledge of the XRP Ledger and its associated technology.

Now is when all of us can cooperate even more closely to ensure that XRP achieves what it was meant to accomplish;  to lead the entire cryptomarket into mainstream adoption and usage of no-counter-party, decentralized digital assets that can scale to grow the entire global economy beyond its current fiat-based limitations.

Sources and Credits:
Cover Art: Thank you to Orlova Maria

Most people, rightly or wrongly, begin their crypto journey after first hearing about Bitcoin. Bitcoin is the oldest cryptocurrency, and while it's great as a reference point, technology has come 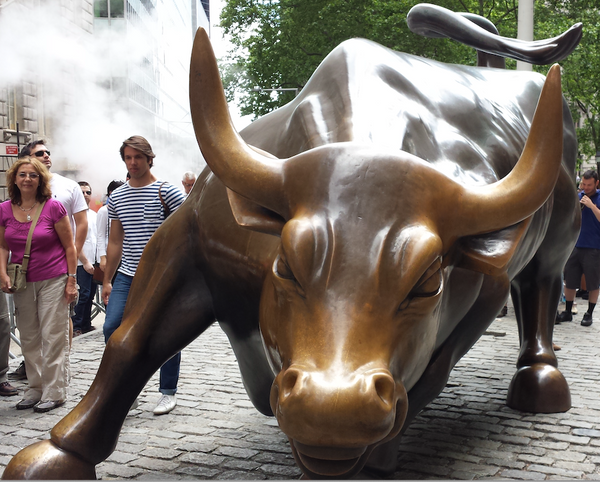 The real HODLR understands, the waiting is over, we have been tested, September 2018 gave us a little bit of hope, but May 13, 2019 gave us what we waited