“I’ll be buying myself a new Strimmer”

What started out as a simple investment made secretly behind the wifes back, has rapidly turned into a way of life for myself and an every growing group of new crypto investors. I had heard of XRP back in early 2017 and at that time I just wasn’t ready to jump in. November 2017 I decided to take the plunge, and several evenings later I find myself at the shed. I go to the shed a lot, its J’s fortress of solitude, his castle and its also where I like to hang out have a few drinks, smoke, chew the fat and basically have fun. So I am in the shed and several hours into the evening the conversation somehow came round to bitcoin. Our normal conversations would be towards the mundane or irrelevant so I am not sure how this happened. I sat back quietly listening as Mrs_Raven, J and his significant other Shel talked a bit about the whole bitcoin thing. Now you have to understand we live in a very rural community, these are people who have never so much as invested in a common stock let alone the big bad world of crypto-currencies, but here we are. After a bit I couldn’t help myself and I started to talk about XRP I explained what I had heard and what I had read about Ripple and XRP. Even back then it was obvious to me that this thing had some serious legs and given enough time it was going to change the world. The big surprise was when Mrs_Raven turned to me and said, we should all invest some money into it then, apparently she was sold. Shel got excited, J not so much but his time would come. I came clean to the wife and then explained to Shel how she could go about buying some XRP. The next morning I got a text message from Shel, it simply said “I am in I have done it” and thus begins the story I want to share. Its a simple story about how a crypto currency which to this day remains relatively unknown created a group that now spans the world, its a group of small investors, some of us had dabbled a bit in stocks others had never so much as put money into an ISA, however within the space of less than 1 month starting in December 2017 our little group grew and grew, it spread its wings and now we have people from as far away as Australia involved. This is part of the irony to me, I can chat to these crypto-friends in real time over whatsapp but if I needed to get some money to them, then its just not possible to do this in anything like real(or even near real)-time.

I think the single biggest thing that drove the expansion of my group was the Bull Run in December, as I shared tales down the pub people asked how they could get involved and we had our little bit of Rural Fomo, people joined the whatsapp group so I could share news stories, and before I knew it they were inviting their families and friends and so on, I became the Patriarch of our little group, suddenly I had Crypto-kids, and crypto-grandkids I am pretty sure I may have a few Crypto-cousins now as well. Every day we would chat and talk and share news stories with each other, some of us discussed other coins we were investing in. This was not big time whale strategy just a group of like minded people trying to make a few quid from some investments.

Everyone knows how the Bull Run story ended, by Mid January the money had gone people generally across the twitter-verse and on most social platforms had lost hope. People had invested everything during the run and were now sitting on huge piles of red, the mood was sombre and at times emotional. I went back to my group to see how people were doing and to my surprise I kept hearing the same thing. Give it time, it is early days, this coin will explode with Adoption and utility. You see what I never ever realized is that as we created the group and as we shared knowledge we have created a collective that genuinely see’s beyond the here and now, today’s price doesn’t matter. That’s not completely true, of course today’s price matters, but to my group its just a small dip on the way to greatness.

So back to J, he did eventually jump on board and picked up a little bag early in the December run, he got lucky and actually managed to pick up during one of the early dips and this put him in the game at around $0.2095. As the run went on J continued to buy in and has ended up with several thousand XRP, granted he is holding a lot of red right now, but his overall DCA puts him in the green. J has the longest view of us all, he is thinking 5–10 years a semi-retirement plan if you will.

A couple of weeks back we were once again hanging in the shed, bottles of Bucky were flowing, Mrs_Raven was attacking her usual tipple with gusto and I was the designated driver. Inevitably the conversation got around to what we will do when XRP moons. I grew up in London and I am quite material so I want the nice house and a good car, but J is a different kind of beast. I asked him what he was planning to do when XRP comes in. “I am going to get myself a new strimmer” was the simple reply.

You see for us, those XRP are going to provide for each of our needs and wants in different ways, we may never have enough to buy a Lambo, but if we set ourselves realistic ownership goals along the way, we will never be frustrated with our investments. To be honest if I know J at all, I think that when XRP moons he will go out and buy that shiny new Stihl Strimmer, and I am pretty sure he will use it every day.

This simple story illustrates what a wonderful and diverse group of people can be found in the XRP community. Over the coming series of Blogs I will try to share more tales from the shed, and stories from the other people in our group. We have many gifted bloggers in the XRP world, they are already covering the technicals and the fundamentals, so I have no intentions of trying to go head to head in these areas. I simply want to share tales of how crypto is changing normal folk, how XRP will bring happiness to many across the world, and how right now, today, every single person reading this blog has a chance and an opportunity to start saving up for your very own new strimmer. 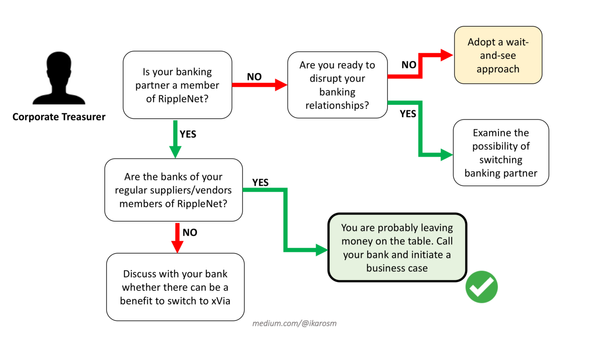 Not all payments are created equal. Treasurers around the world feel the pain from the correspondent banking model inefficiencies, but the ones transacting in less liquid currencies suffer more. The adoption of Ripple’s solutions can offer tremendous benefits to Corporate Treasuries.