XRP has been added to so many worldwide exchanges in the past three months that I didn't take notice of specific ones based in South Korea.

The timeline was fast, I remember, and looking back on it now I can deduce that these exchanges compete actively for customers based on the quick sequence where each added XRP trading: If anything, I made an unconscious note that the pacific rim was more well-covered, but I really didn't give any more weight to South Korea than any of the other countries that were being served by exchanges that support XRP.

It quickly became apparent after XRP was added that South Korea shouldn't be placed in the same category as other countries with fiat / XRP pairings - and XRP traders were not the only ones caught off-guard by the incredible appetite for crypto coming from South Korea.  Ethereum received an enormous boost in price and demand from the country as well starting in late April and early May as exchanges added support for Ether. 4

In his Quarter 2 XRP report, Miguel Vias from Ripple noted: 5

"XRP/FIAT volumes in Q2 were 21 times greater than XRP/BTC volumes in Q1. While some of this can be attributed to growth in USD and EUR pairs at Bitstamp and Kraken, the bulk of this transition was due to increased activity on Korean exchanges."

We are now past the end of the second quarter and the volume from South Korea was not an isolated occurrence; South Korea has shown a massive and sustained appetite for Bitcoin, Ethereum and XRP.

Then perhaps you'll believe the numbers themselves as presented real-time on XRP Charts.  This is a screenshot from July 23, 2017, for the latest 24-hr volume: 6 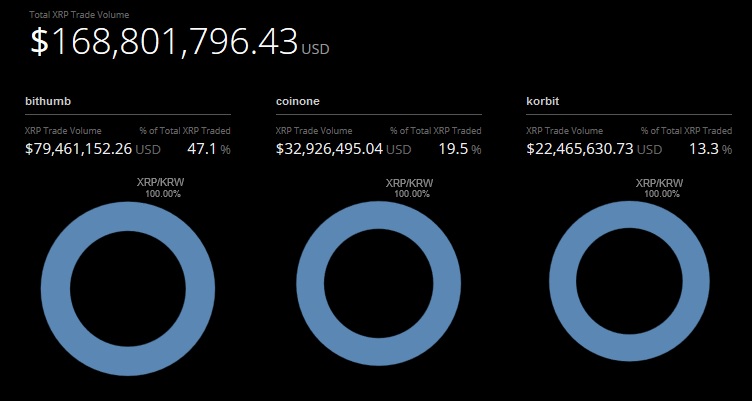 At the top is the total volume, roughly 170 million dollars in the last 24 hours.  Then as you can see, the top three exchanges are listed.  All are from South Korea.

In fact, it indicates that the XRP/KRW pairing is responsible for ~ 80% of total trade value on the XRP network!

The Same Thing is Happening to Bitcoin and Ethereum

As an example, Bitcoin currently trades at a significant premium in South-Korean only markets; a $300 premium is not uncommon. 7

Ethereum owed most of its early May price rally to exchanges in South Korea.  One author noted: 8

In a relatively short period of time, South Korea has become the largest Ethereum exchange market with a $335 mln daily trading volume and 38 percent market share.

What is Driving the Crypto Demand in South Korea?

It's very simple, and it is awe-inspiring: retail investors.  Here in the United States, and in Europe generally, trading in crypto-currency is viewed as a novel investment instrument, managed by companies that your parents don't know.  Coinbase?  Kraken?  These sound like video game titles to traditional investors here in the United States.  Go ahead: Ask your parents if they've ever heard of them.

But in Korea things are different.  Korbit, the second-largest exchange, is partially owned by SK Telecom, the largest telecommunications company in the country.  In addition to this type of credibility, South Korean investors have a reputation for moving with the herd - a herd that is influenced by the media; for example, Ethereum prices surged after favorable announcements about preliminary Ethereum Alliance deals. 9

A Signal of Things to Come

One recent Fortune magazine article speculated that the crypto-currency market might reach a trillion-dollar level.  10  As a benchmark, the entire market currently stands at approximately 100 billion. 11  This would imply that the crypto industry will grow by as much as 1,000 percent.

Keep in mind one thing if you think 1,000 percent growth is too optimistic: South Korea's population numbers only 51 million people! 12

If I know you, you are doing the math right now and probably reaching the same conclusion as me:  Expand your portfolio now, before XRP goes mainstream.

Being the best is not enough. Apple is the best at smart phones, but they know very well that marketing and getting the word out is a key factor.  It's necessary to persuade buyers! Like Apple, Ripple has the best product as well; XRP.

I'm going to give you my honest opinion. If you watched the live-stream from the Federal Faster Payments Task Force website yesterday like I did, and you know about Ripple and XRP, it was frustrating at parts; Sean Rodriguez, the Federal Reserve's Faster Payments