One of the light-bulb moments for many XRP Tip Bot users happens when they receive their first tip.   Confusion first sets in:

"What is this?   How do I claim this XRP?"  is usually the response.

And then we jump in with a helping hand, pointing them to the most intuitive and easy-to-use crypto app in cyberspace;  The XRP Tip Bot.   It's so easy that the user doesn't even need to create a new password;  they just log into the [XRP Tip Bot](XRP Tip Bot) using a standard Twitter log-in, and 'boom!' they can withdraw their XRP to their own wallet.

But it's easier to just leave these amounts in their XRP Tip Bot account, because then they can continue the fun by tipping others.

This core ability of the XRP Tip Bot, the ability to tip somebody as long as they have a Twitter account (or a Reddit or Discord account), makes it a very potent tool in spreading the word about XRP.   XRP becomes easily accessible, and tipping is the fastest way for people to end up owning small amounts of XRP.

And XRP can be divided into millionths:  Each one-millionth of one XRP is known as a "drop."

Yes - you can send people very small amounts to let them know you appreciate their tweet or post on social media: 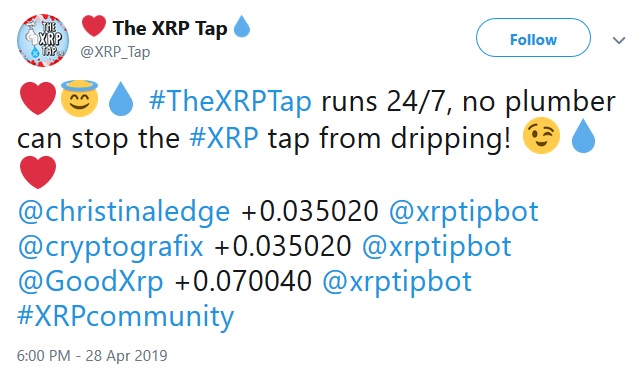 All it takes is one zerp in somebody's XRP Tip Bot account to keep somebody in tipping mode for a long time, if necessary.   This is one of the strengths of XRP, and crypto in general;  it can be divided into very small units, as long as the amount can cover the necessary transaction fee.

While Bitcoin has transaction fees that have reached over an average of $50 dollars on occasion, XRP's transaction costs are measured in drops, and at most when the network is busy, it can be measured in thousandths of a penny.   But XRP doesn't suffer from the flawed, incentivized mining structures of proof-of-work tokens, so the transaction fees can be extremely cheap on a consistent basis, making one XRP last for a very long time if necessary in the tipping world.

Some accounts even have their periodic 'auto-tipping' set up to distribute a thousandth of an XRP every day or so to their favorite charities or other community members:

These attributes of both the XRP Tip Bot and XRP's native characteristics mean that tipping is:

But the overriding feature that is most important is that the recipient of the XRP doesn't even have to have a current XRP Tip Bot account!   As soon as they receive some XRP from somebody that does have an XRP Tip Bot account, their own account is automatically created based on their Twitter avatar name.

This leads to some very fascinating possibilities ...

Of course, the most well-known proponent of using the XRP Tip Bot for charitable giving is @KingBlue, who originally championed its use for giving to the corporate Twitter account belonging to St Jude Children's Hospital.

After almost a year of steady donations large and small from various donors, the St Jude corporate Twitter account has an enormous sum of XRP in it: 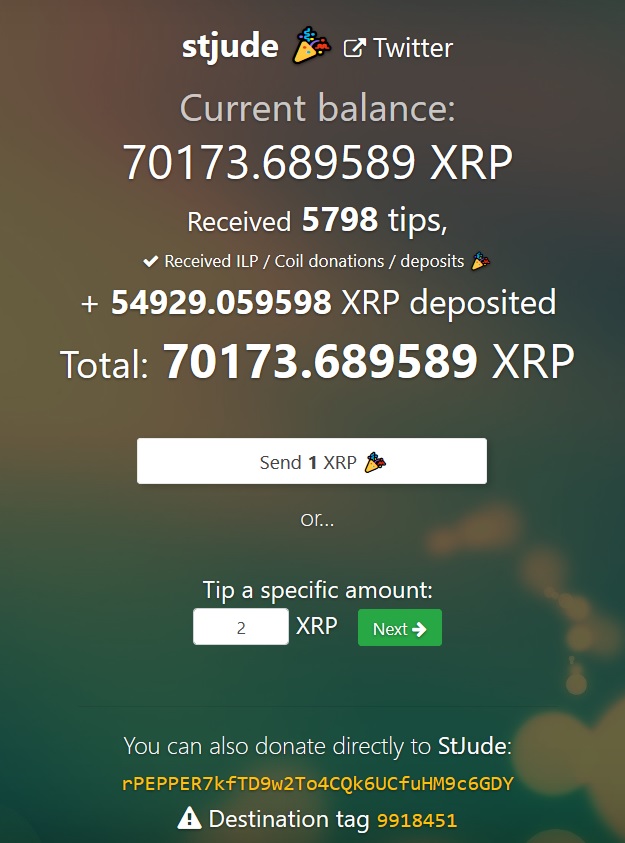 His approach caught on, and many others in the community joined him in championing worthy philanthropic causes via XRP Tip Bot donations;  this group calls themselves the Good Souls Group, and is an all-volunteer group from the XRP Community that seeks to establish transparent and clear guidelines for those wishing to use the XRP Tip Bot in this fashion.

The group also worked with community developers to create an "account splitter" so that when XRP Tip Bot donations are made to it, it automatically divides the tips between the various "GSG Charities:" 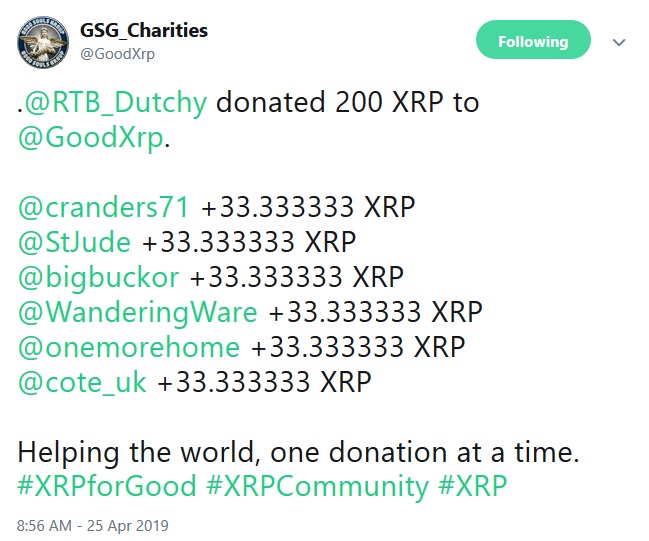 Donating to charities is a great way to both help worthy causes, and to bring awareness of XRP.

The XRP Tip Bot has been used to extend an introductory hand to others on Twitter as well;  when those in the XRP Community tip others, it spreads goodwill in the form of free crypto, and allows the recipient to explore the possibility of learning more about the digital asset they just received.

One of the best examples comes from David Schwartz, the Chief Technology Officer for Ripple:

It's an example of how to reach out to other crypto fans in a positive way;  most people - not all, but most - appreciate a little free crypto here and there to add to their stacks.

It's this approach that we should consider.

XRP has many powerful champions, including large companies, financial institutions, and cutting-edge technology companies that are a part of the Xpring investment list.

In addition to these businesses and small groups, individual developers have constructed very impressive hobby projects 'built on XRP', and have contributed enormous value to XRP stakeholders.

In addition to these businesses and hobbyist developers, there's an easy way that we can use the XRP Tip Bot to help extend the network of crypto fans that are knowledgeable about the XRP network and its technological capabilities:

Tip somebody that has never been tipped before.

It doesn't have to be a large amount.   It can be a single zerp or even less;  but sending an XRP to somebody that has never owned one before effectively enlarges the circle of crypto owners and users that are now part of the entire user base for the XRP Tip Bot.   If even a small percentage of these recipients end up investigating it or attempting to claim their 'free' XRP, then by definition they are learning a little bit more about XRP in a positive way.

Twitter holds the vast majority of XRP Tip Bot users at the current point in time: 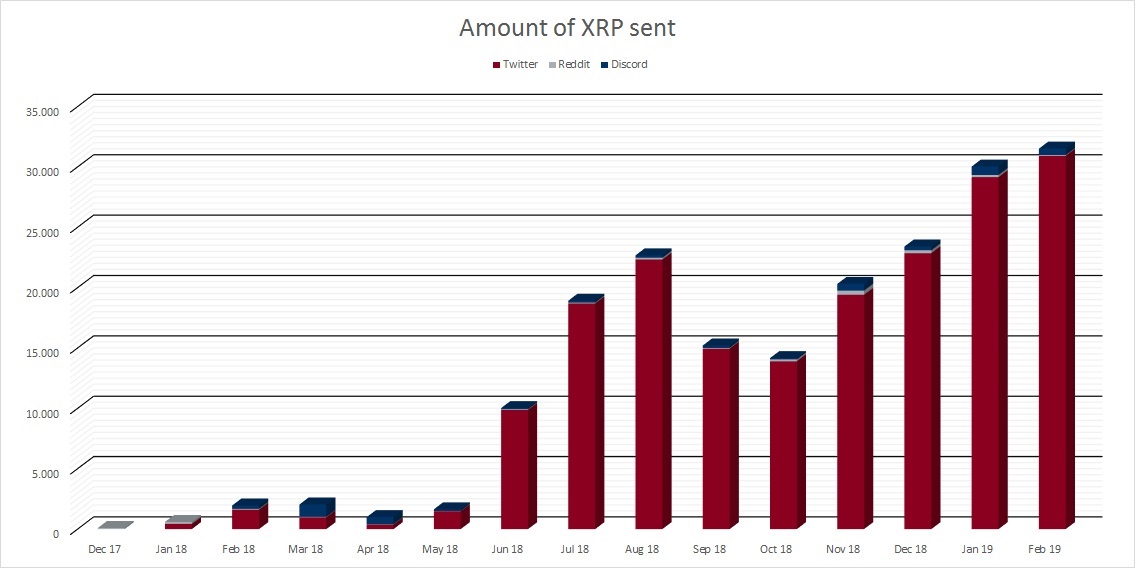 Understanding this aspect of the XRP Tip Bot user base composition, we can mold an approach to reach out to potential new customers by customizing it for Twitter.   To do this, I think it may be good to use a hashtag to organize the effort, and allow stakeholders and the curious to search Twitter using this keyword.

When we make an extra effort to reach out to new potential users of the XRP Tip Bot, I suggest we use the following hashtag:

This emphasizes the 'storage value' use case that all crypto-assets promise:   For our community, it allows us to positively extend knowledge of the XRP Ledger while having fun.

When I do this, it will be with the goal of extending the reach of our community by simply sharing some of my zerps, which the XRP Tip Bot allows me to do, even for those recipients that are not already users.

Have Fun & Educate Others

Remember to have fun as we share XRP by tipping others, and make every effort to be positive about explaining XRP to those that you are bestowing your zerps;  be ready to answer some of the basic questions that may arise as you send XRP to friends and acquaintances: 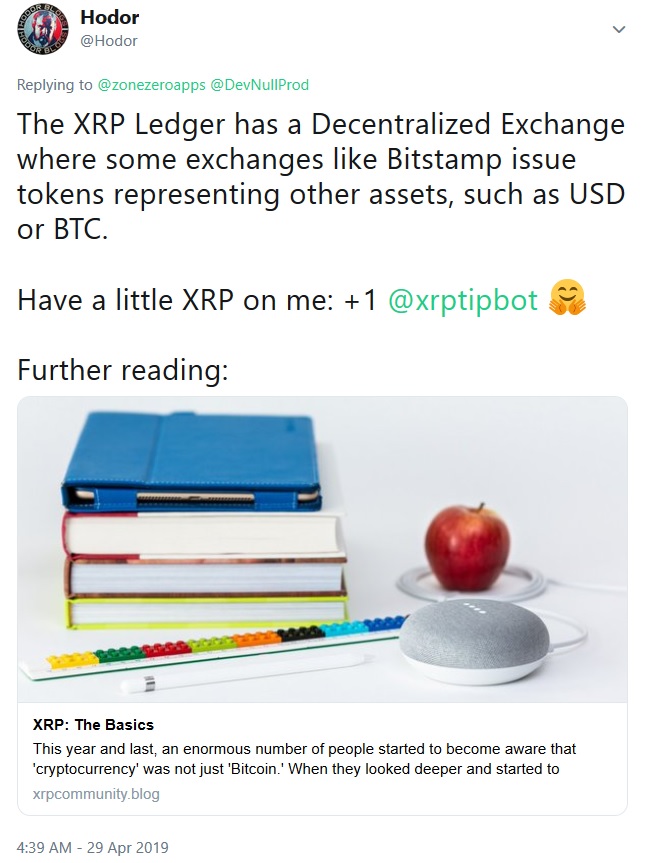 If questions do arise, there are many resources to share, including the following:

There are many other resources, of course, but these ones are probably the best for introductory topics.   For those wishing to dive deeper, the following platforms have some good comprehensive lists of resources:

These sites contain a wealth of valuable information and history about the XRP Ledger and the XRP Community, but you have to know what you're looking for.

All Of Us Can Help

Sometimes those of us without technical backgrounds may feel left behind by those community members with deep code development roots, and wonder how we can contribute to helping grow XRP's footprint.

There is no mystery;  just set aside a small amount of XRP for tipping, and share your own goodwill across the Inter-web.

And remember to use the hashtag #ownXRP when you tip these XRP newbies!

Cover Art: Thank you to Bradley 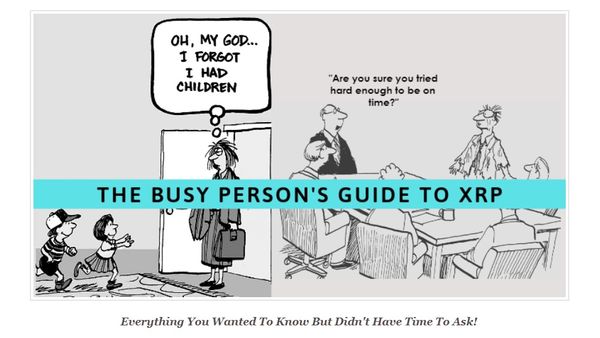 The Busy Person's Guide to Ripple and XRP! Everything you wanted to know but didn't have time to ask!

Where can Coil go? What can we achieve with it? Can I get to the movies to see Avengers before some jackass on the internet spoils it for me? These are the questions on my mind the past few days, and I am going