As one more quarter reaches its end it is always interesting to take a step back and look at recent developments, spot any trends that may have occurred and try to understand the strategies behind those developments. This report will take you through a flashback of the last three months (April, May and June 2019). We will take a sneak peek into everything that happened in those three months in relation to XRP and Ripple. If you need to dig deeper, links are provided for every news item. An analysis of the quarter along with a brief comparison to the previous quarter will follow. This report does not constitute financial advice. It is merely my own interpretation of current events.

• Santander announces the expansion of its Ripple powered solution One Pay FX to non-customers with its standalone app "Pago FX".
• XAGO,a Money Transfer Operator based in South Africa, uses the XRP Ledger as a distributed exchange, where users can exchange XRP for ZAR. 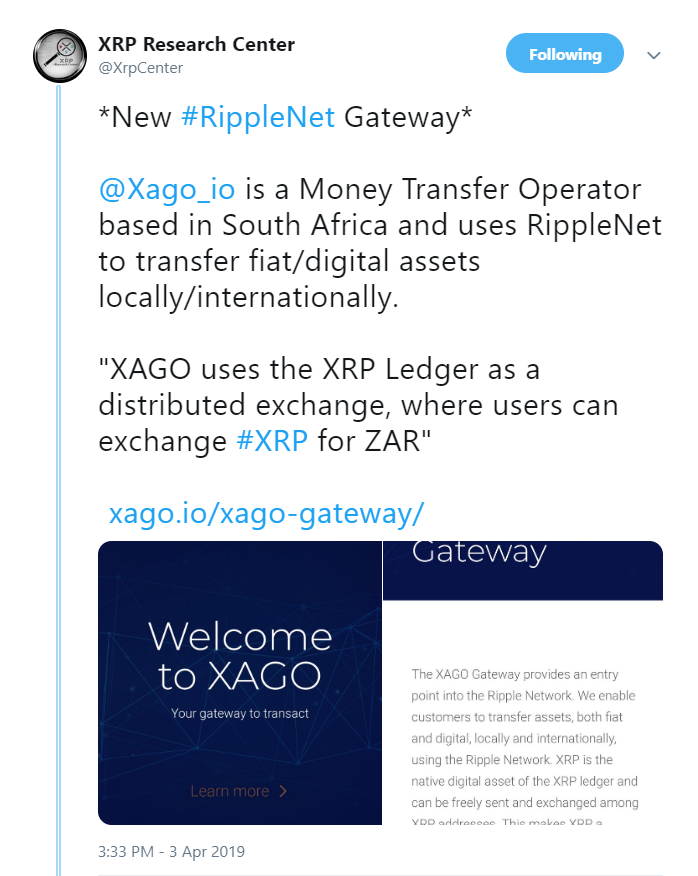 • Japanese Imports company Tegiwa, has announced on facebook that they now accept crypto for payments via Coingate. XRP, LTC, BTC and ETH mentioned.

• XRP added on Estonia based exchange EO.Trade with BTC, ETH and EO pairs.
• Puma browser partners with Coil to bring a new business model for the web. 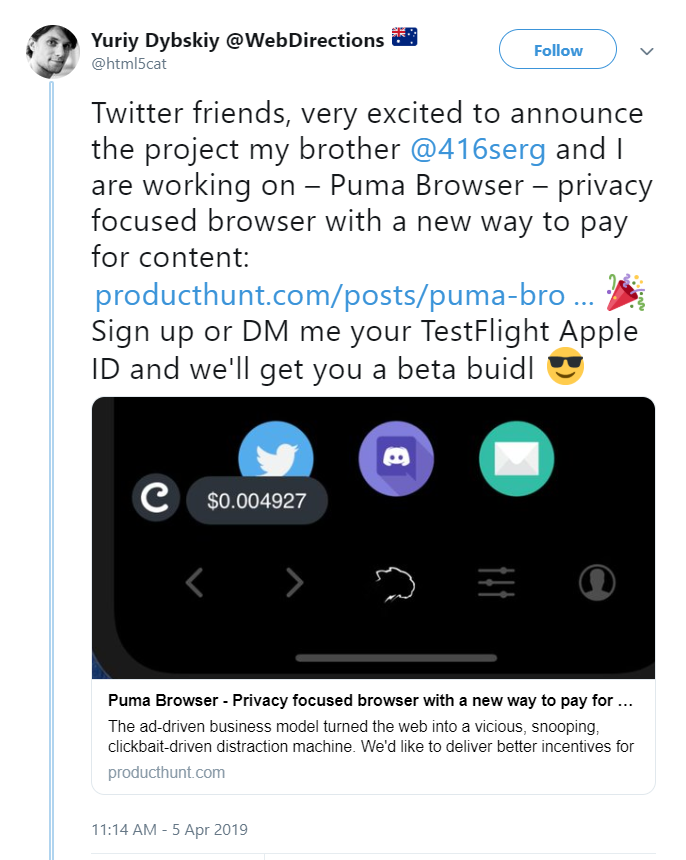 • Velic exchange goes live with 6 XRP pairs, 3 of which are XRP based. 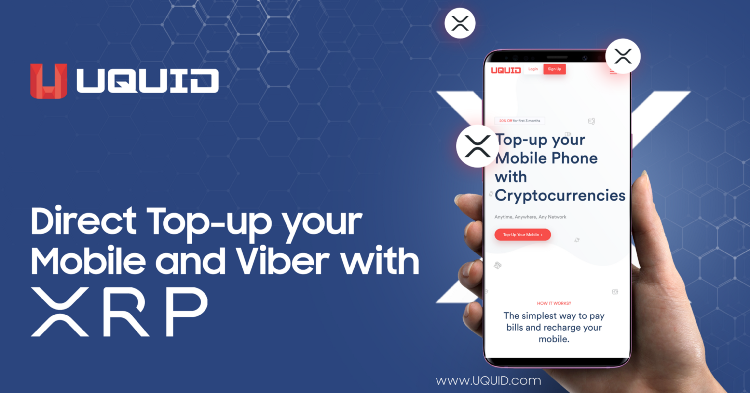 • BelcoBTM, a company providing cryptocurrency vending services to customers in the USA and has launched multiple locations in New Jersey, has announced the addition of XRP.
• Xpring invests in Bolt Labs, a company focused on anonymous payment channels, instant, cheap and private payments for everyday purchases. 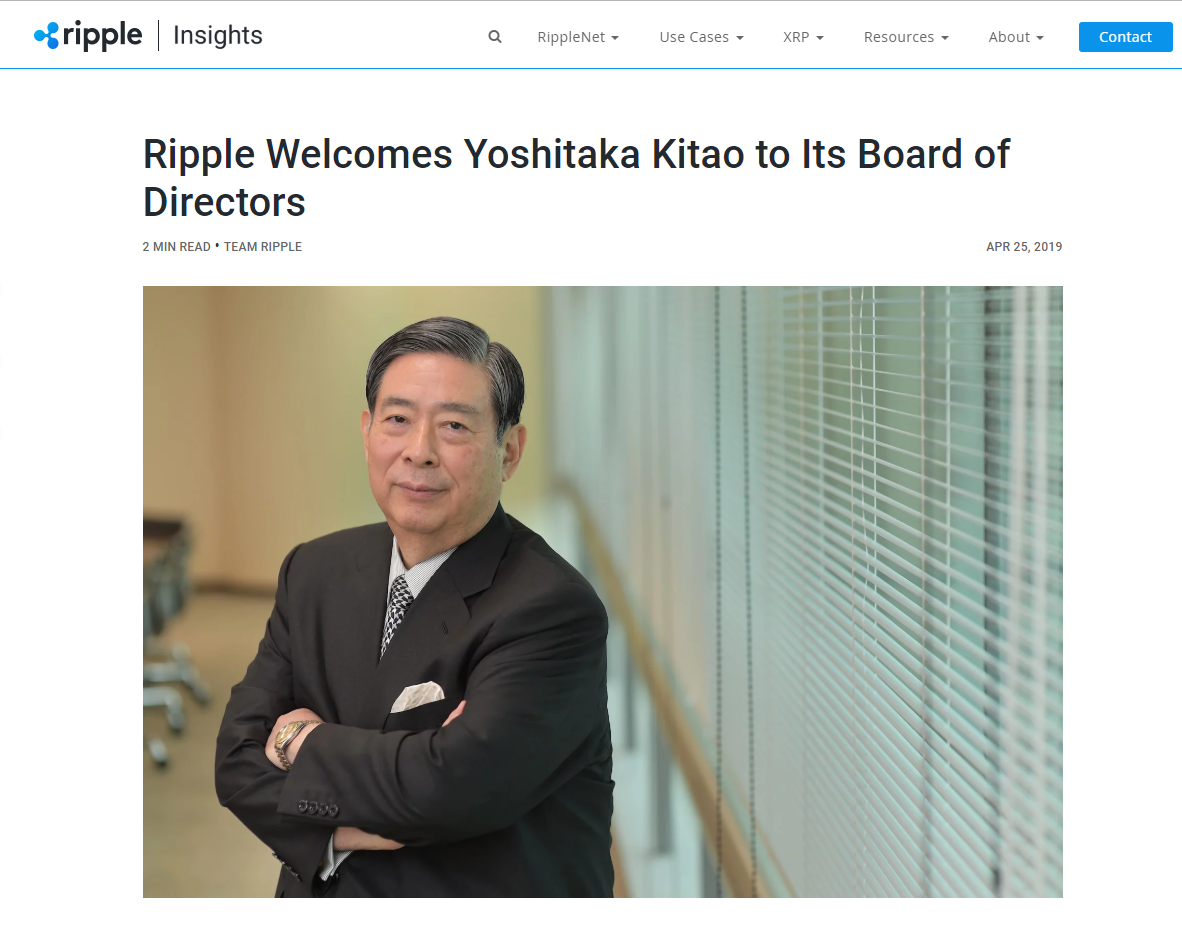 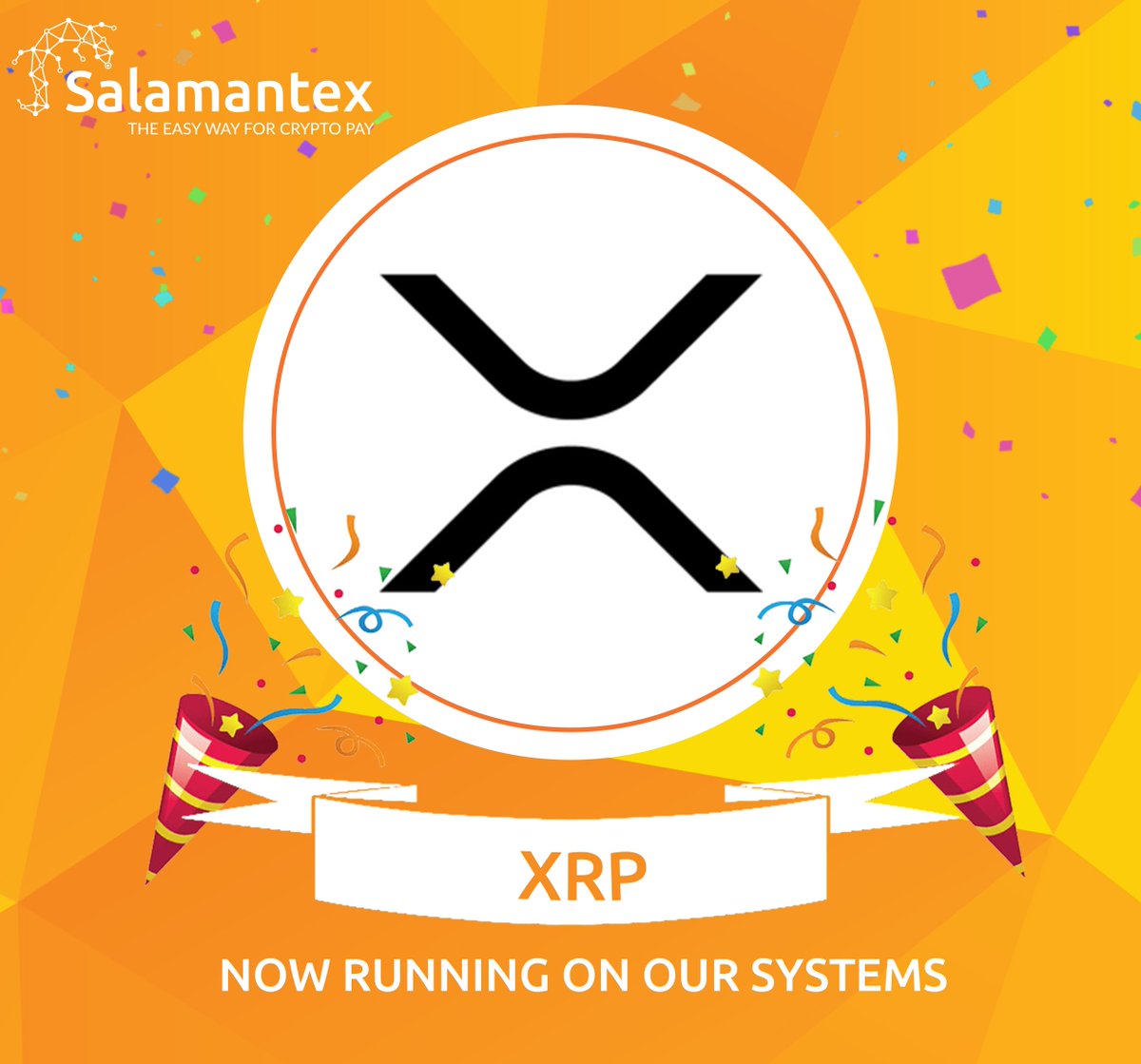 • Bitrue partners with Wietse's XRPtipbot to make it easier for users to deposit other cryptos to the XRP TipBot.

• eToroX adds 3 new pairs for XRP, 2 of which are XRP based.
• XRP added on Bytepower Exchange (BPX) with a BTC pair. 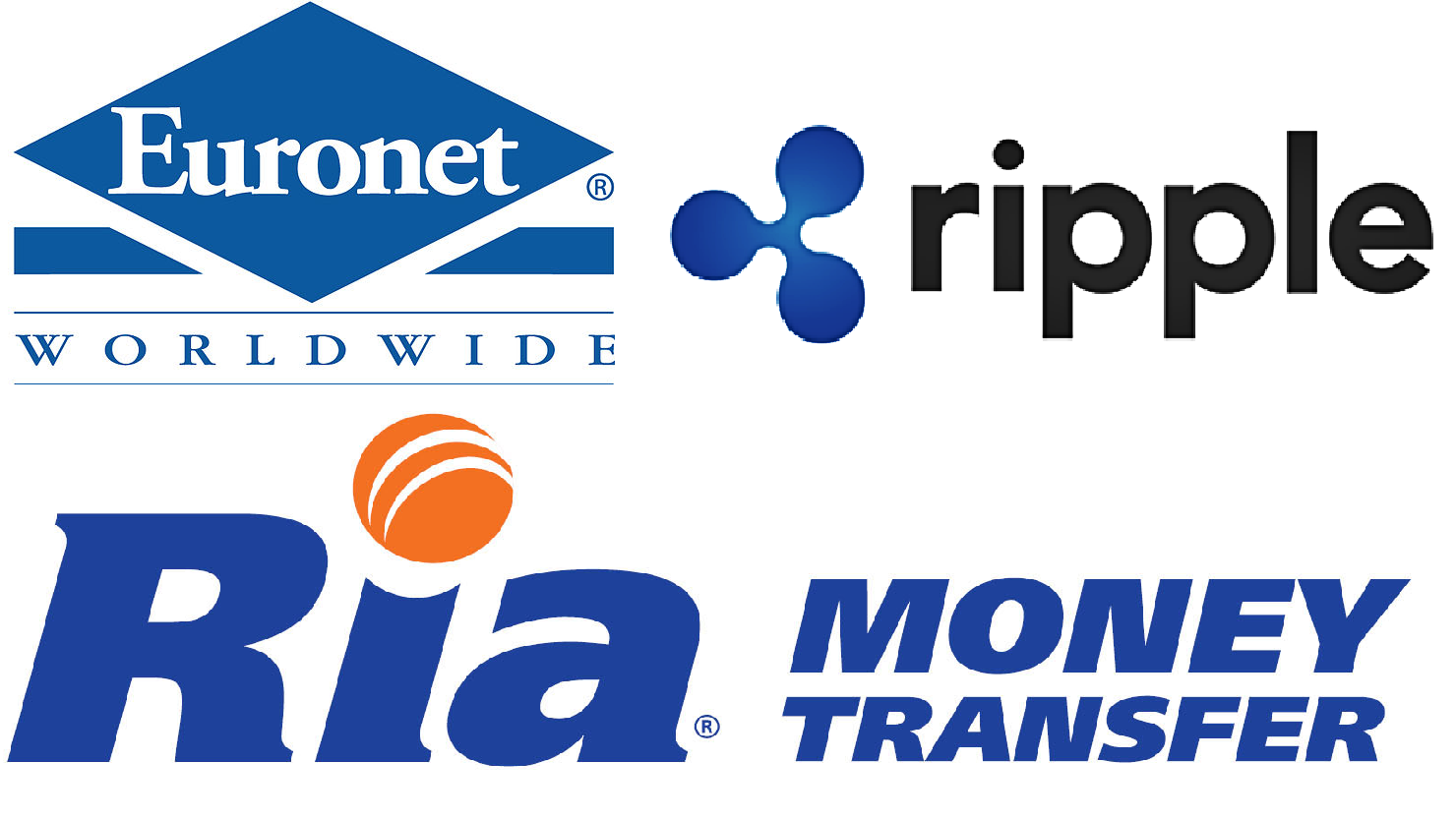 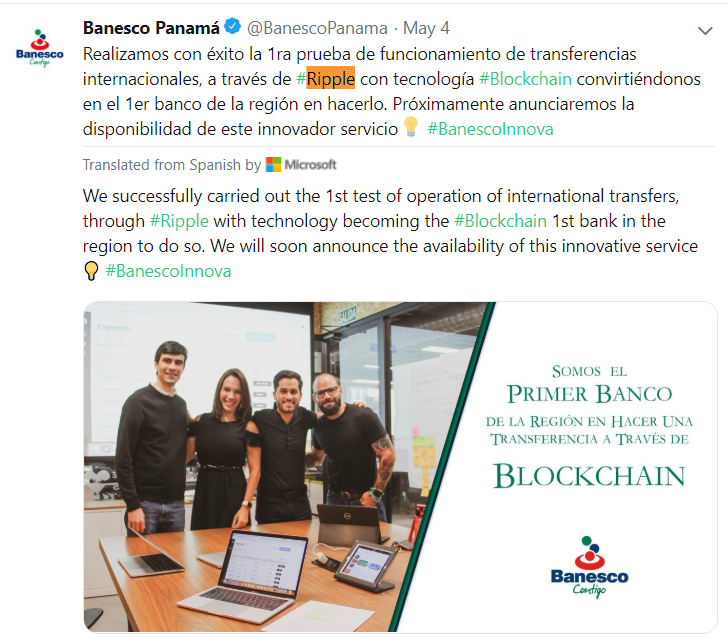 • Birake, an exchange based in Bucharest, lists XRP with a BTC pair.
• NOWPayments, a cryptocurrency payment processing platform, has announced the addition of XRP on its platform. XRP can now be used as a payin and payout option on NOWpayments. 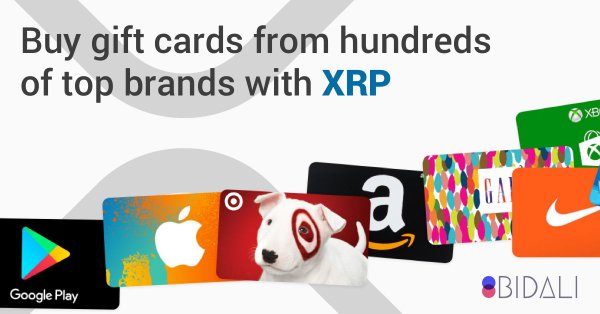 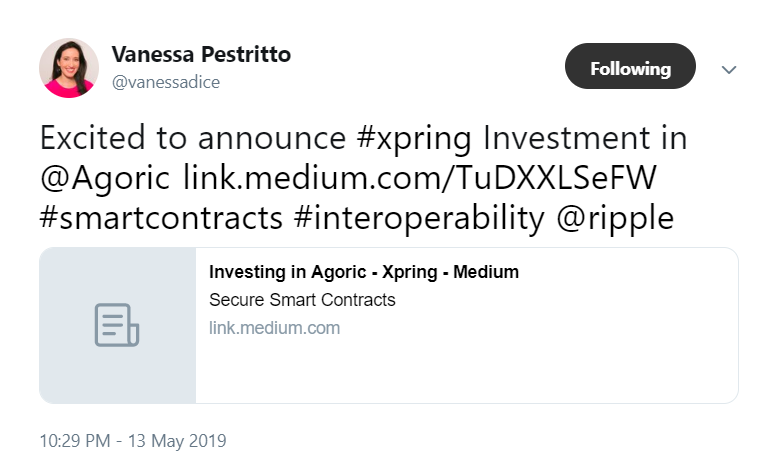 • Bitkeep wallet announces the addition of XRP on its aggregate exchange with BTC and USDT pairs. 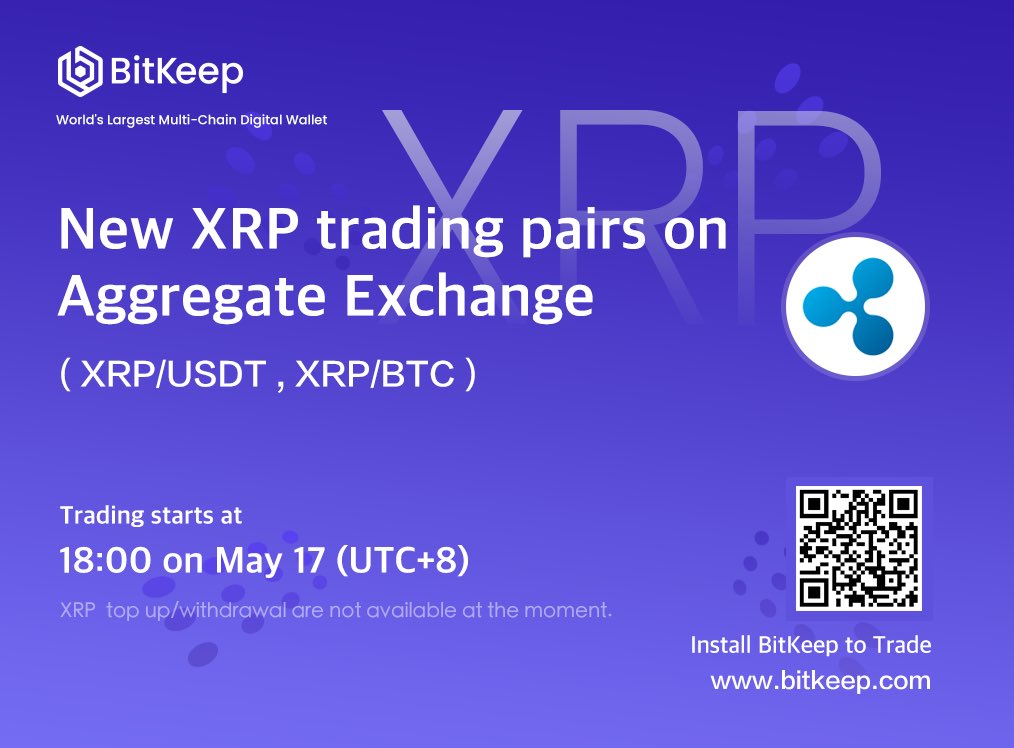 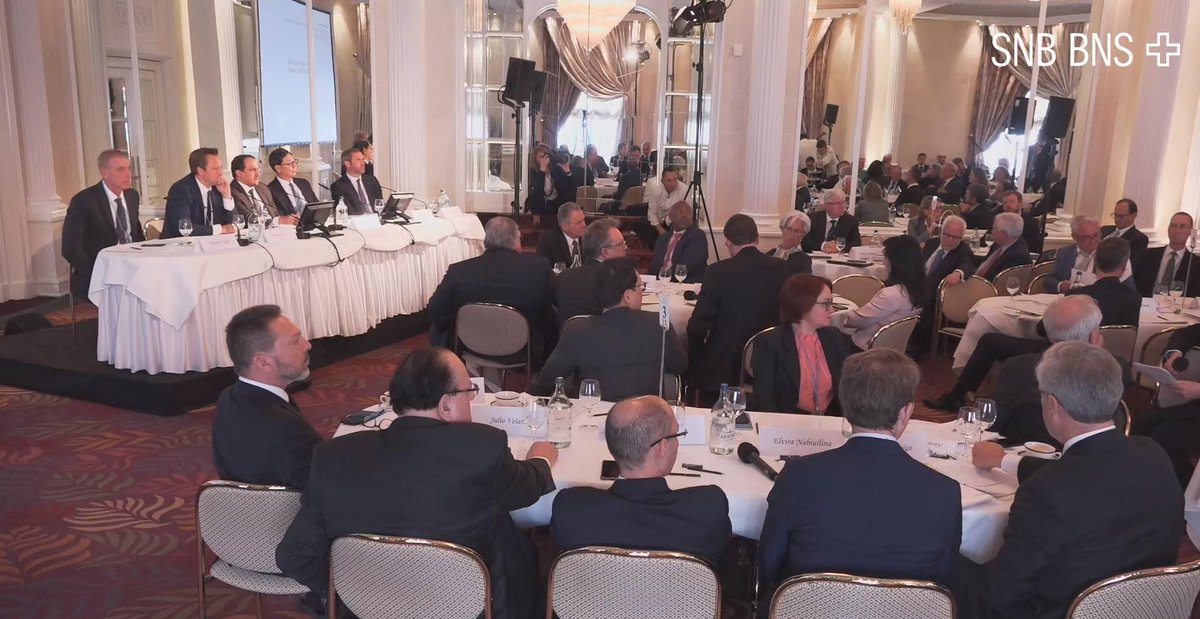 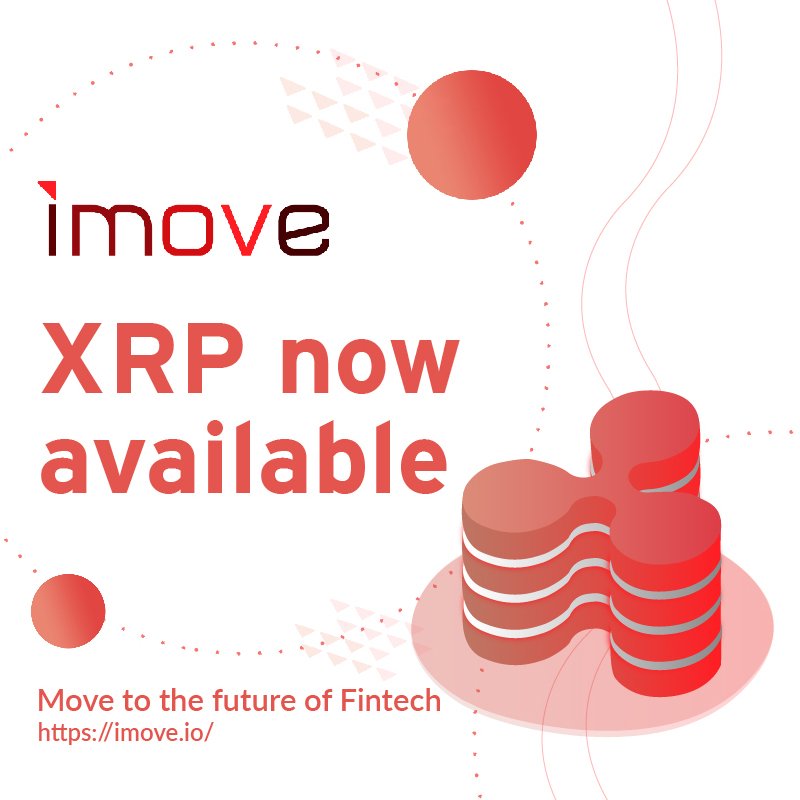 • Leapfrog, a full stack technology services company that specializes in SaaS products, Web and Mobile Applications, and AI, announces the formation of a strategic partnership with Ripple. 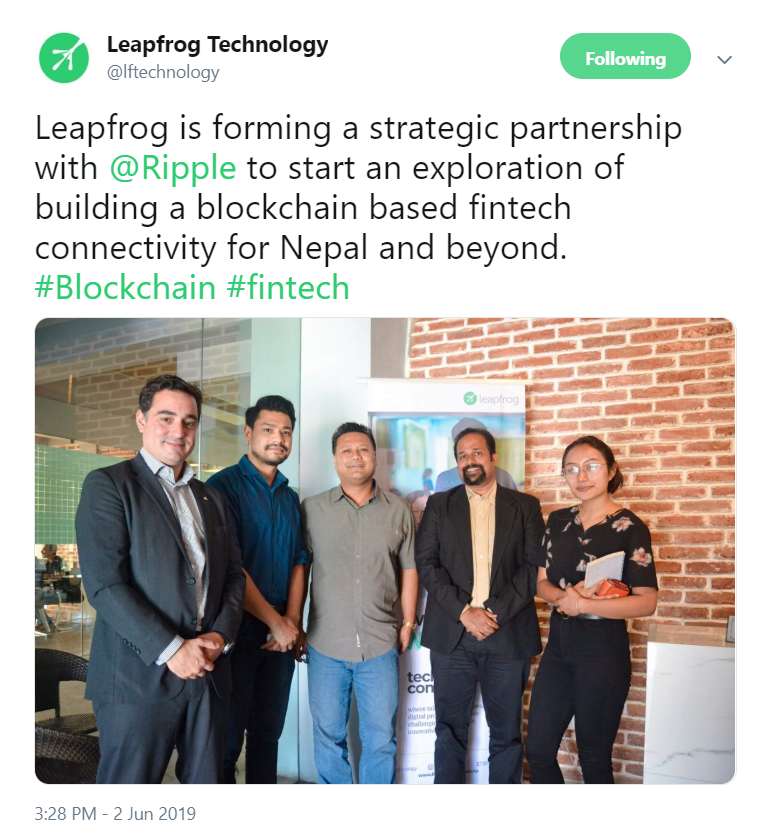 • Ripple takes an active role in reporting on volume and sales of XRP: "Sales of XRP in Q2 will be substantively lower (as a % of reported volume) than in the previous Q, with our stated target of 20bps, likely dropping to less than 10bp".

• Ripple opens an office in Switzerland. 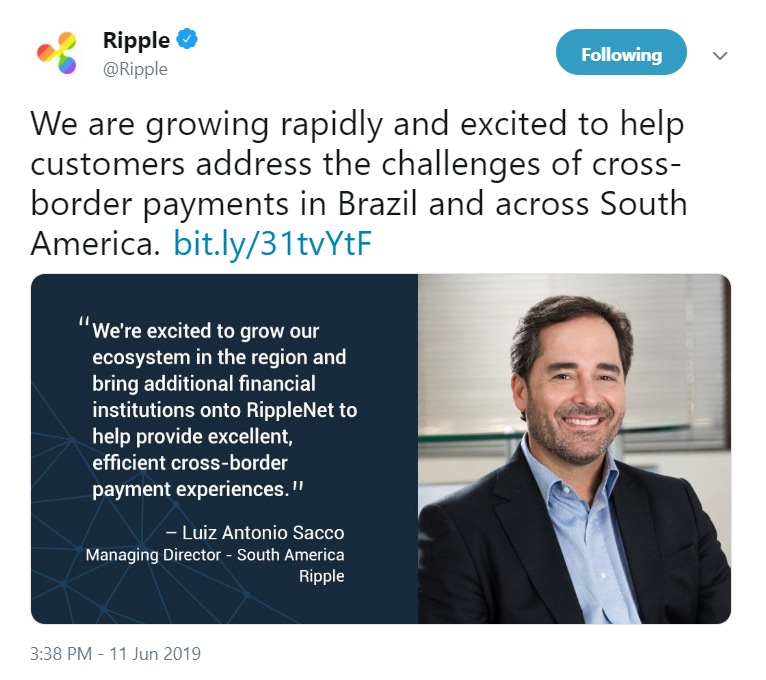 • Ripple listed as a payment method at GoLance, an online workforce platform that connects employers with freelancers based all over the globe.
• XRParcade introduces the "Tipper". An app that allows website owners to attract traffic to their website or a specific page they wish to promote and visitors to earn XRP by visiting websites or completing tasks. 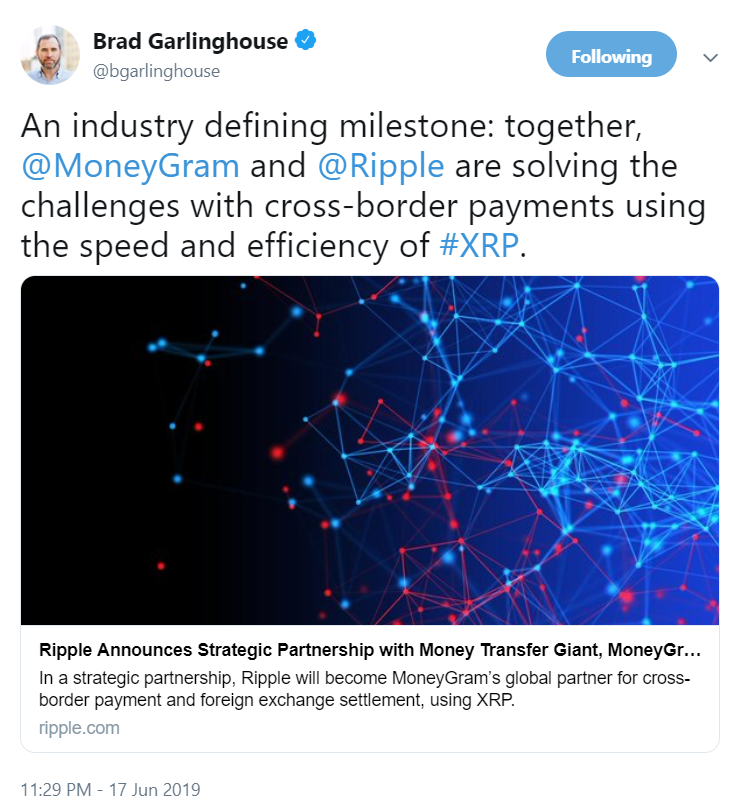 • Banesco Panamá and Scotiabank Chile running proofs of concept (POC) with Ripple. Banesco to use Ripplenet for blockchain-based transfers only between banks in the group (covering the Dominican Republic, Panama, Portugal, Puerto Rico, Spain and Venezuela) initially.
• Coinone Transfer, a blockchain based overseas remittance company, announced that it will collaborate with SBI Ripple Asia to facilitate blockchain based remittance in S.Korea. 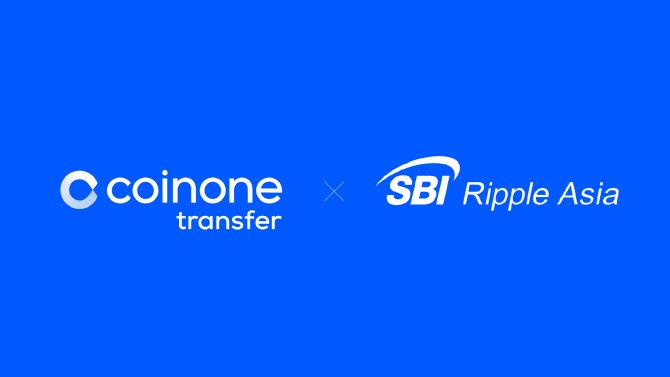 • XRP listed on Bgogo exchange with BTC and USDT pairs. 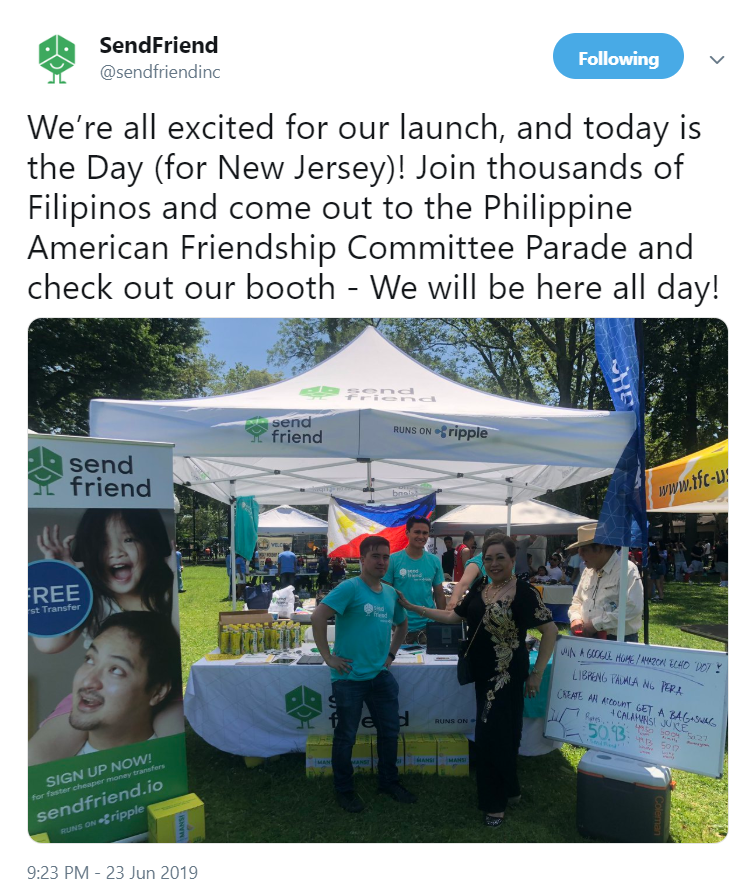 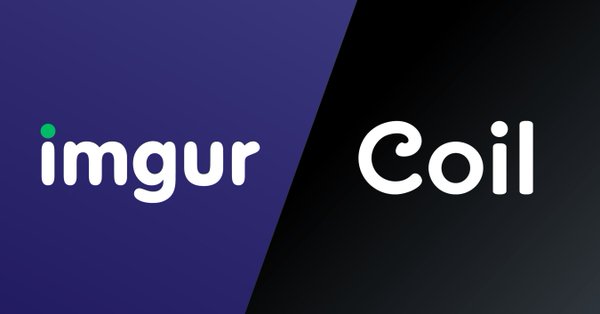 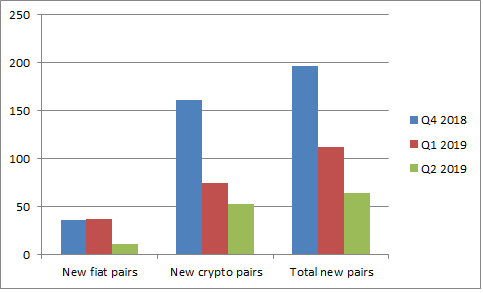 It only makes sense that as the amount of exchanges offering XRP trading and XRP markets increases, the rate of increase will slow down. 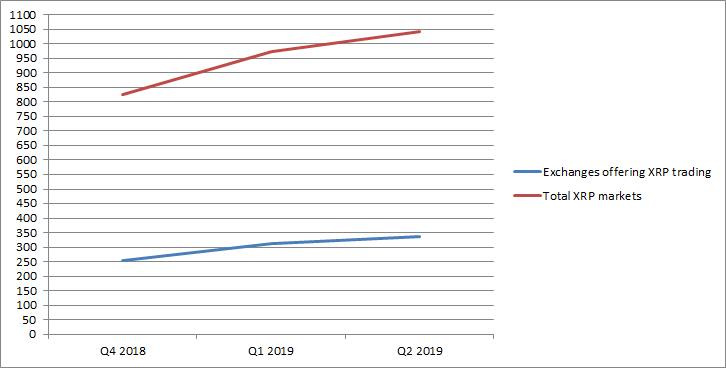 It will be interesting to see however if Ripple announces any new xRapid exchanges. The last announcement came almost a year ago, in August 2018, naming Bittrex, Bitso and coins.ph as xRapid partners, along with Bitstamp. Since then, many exchanges have declared their interest ( Bitrue, Binance, Gobaba, Quidax, eToro, Uphold, Coinfield, SBIVC and Artis Turba) but nothing official has been announced. As xRapid volume starts to kick in, more exchanges will be interested in partnering up with Ripple or even making XRP a base currency in order to attract the XRP community to their platform, a strategy that has worked wonders for Bitrue.

After reaching the milestone of 1000 nodes on December 5th 2018, the amount of nodes has remained stable for the past 6 months.

The network has continued its decentralization with only 23% of the UNL being operated by Ripple (27% last quarter).

At the same time, there are 10 countries running UNL validators, with the majority however (65%) operating from the US. 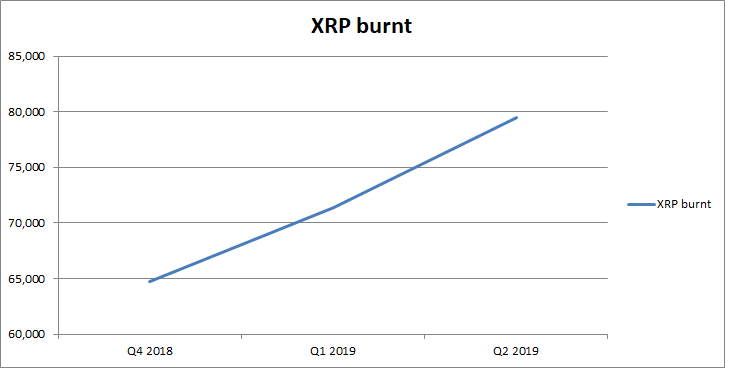 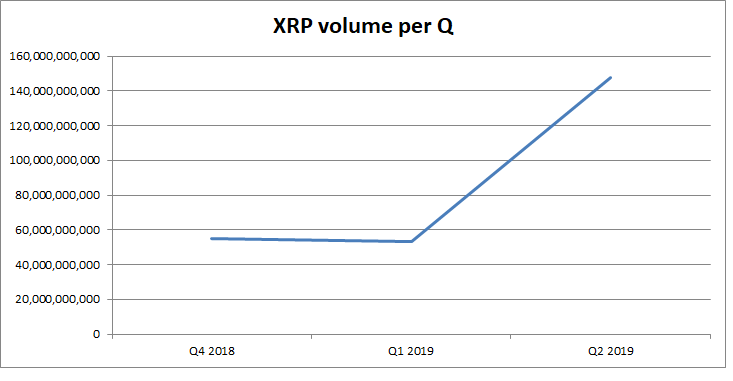 Of course, these numbers by CMC can not be trusted since a lot of this volume is fake, an issue addressed by Ripple. Ripple has announced that during this quarter it would be reducing the % of XRP sales by more than half, from 20 basis points to less than 10. Of course, with the XRP volume being almost triple compared to the previous quarter, Ripple's XRP sales could even be higher to the previous quarter but with a much smaller effect.

With Ripple signing 2-3 contracts per week, we can estimate that in 30 weeks during 2019 so far, Ripple must have signed approximately 75 contracts. Yet we only know of a small fraction of these partners due to NDAs.
We do know that the KNOWN Ripple ecosystem is becoming extremely large with Banks, Money transfer companies, tech companies and universities (University Research Blockchain Initiative) being the most common participants. 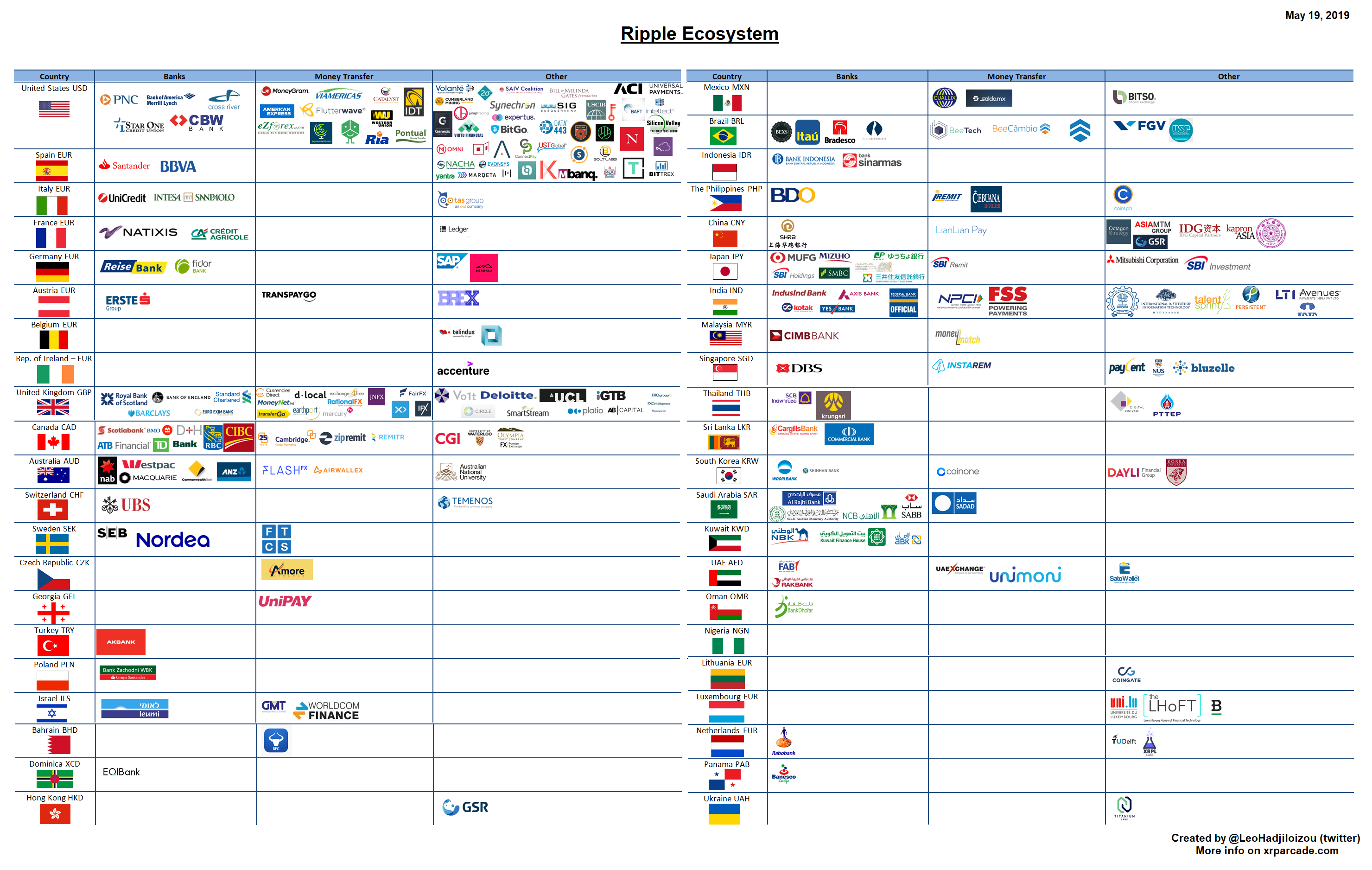 Another fascinating fact is that 47% of the top 75 banks in the world (by total assets) have tested or signed production contracts with Ripple. 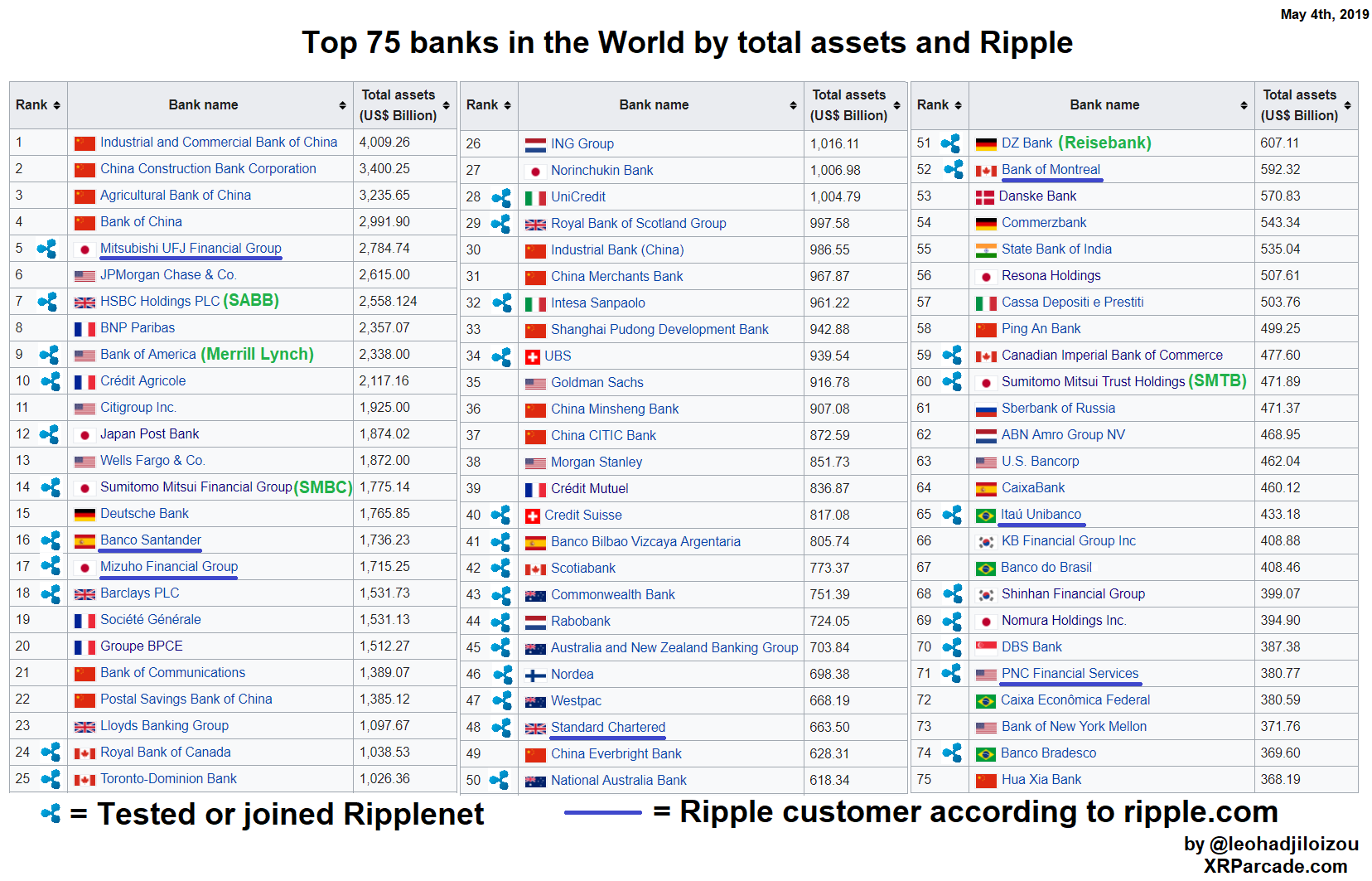 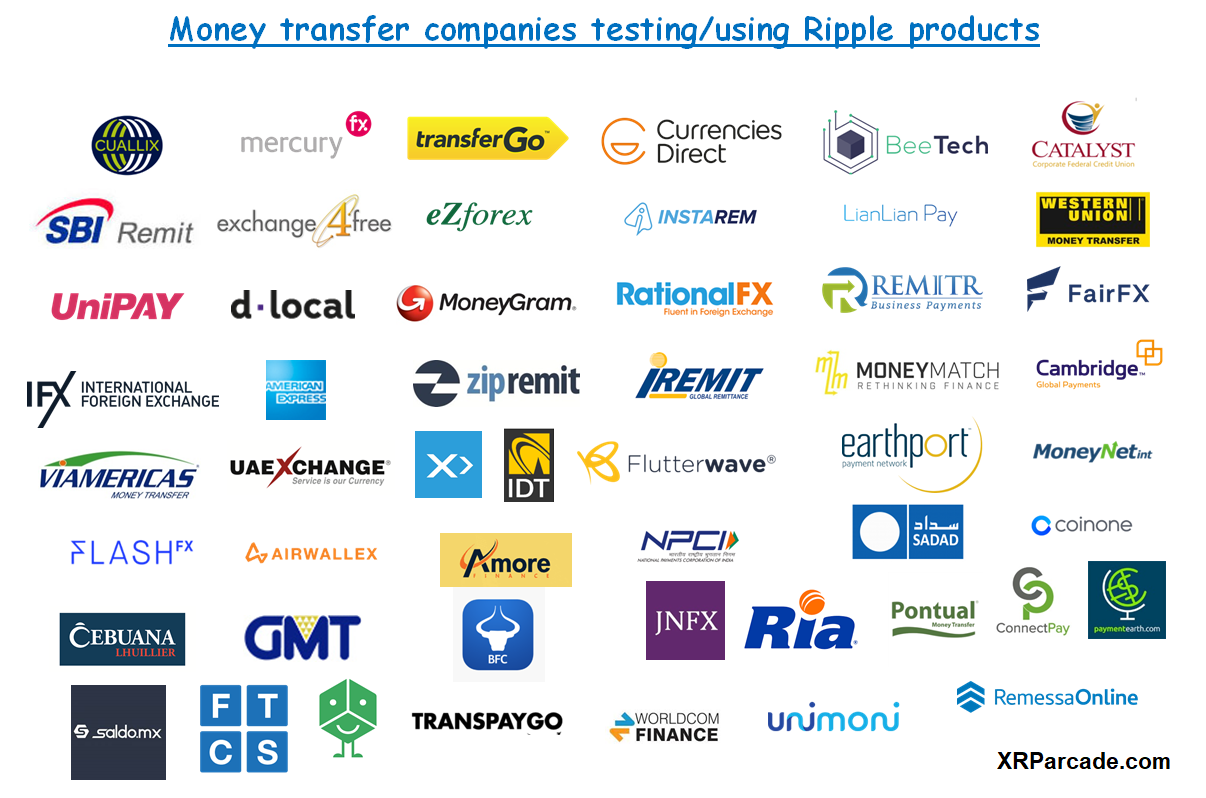 Xpring has continued to invest in companies and specifically in Robot Ventures, Bolt Labs and Agoric. Moreover, Coil seems to be making waves by partnering with Puma browser and investing in Imgur.
Another important development was that Ripple has launched operations and set-up offices in two more countries: Switzerland and Brazil. Through Switzerland, Ripple will serve European countries that have been moving more quickly with regulation on crypto assets. Brazil will be the hub for Latin America, that will help Ripple build the ecosystem in the region. A region with increased money transfer activity and expensive rates.

Past Ripple and XRP goals that have been achieved seem to justify the gradual "slowing down" in those specific aspects. XRP has been listed in a vast number of exchanges and it is available in most countries and fiat currencies. The UNL decentralization has never been better and both Xpring and Coil have been investing in companies and growing the XRP ecosystem with new usecases.
Ripple continues to work to achieve regulatory clarity both for XRP and the crypto space in general. It has recently hired Michelle Bond, a former Senior Counsel at the SEC, with 4 years as the Head of Global Regulatory Affairs and Public Policy at Bloomberg, as the Global Head of Governmental Relations at Ripple.
Ripple has been making strategic moves while waiting for the necessary clarity to come. By creating offices in Switzerland and Brazil it can now grow the Ripple ecosystem in those regions and attract more clients.
The amount of tech companies offering Ripplenet integration to banks and other institutions is also increasing. Companies like TCS (TATA Consultancy Services), Mbanq, Leapfrog and EvonSys are now helping companies join Ripplenet.
Last but not least, Ripple's strategic partnership with Moneygram, the second largest money transfer company in the world, will focus on xRapid. This move is expected to create more liquidity for XRP, reduce Moneygram's expenses, improve its rates and bring more customers. Most importantly, it will be the biggest and most realistic "test" for XRP and if successful, the best advertisment money can buy. 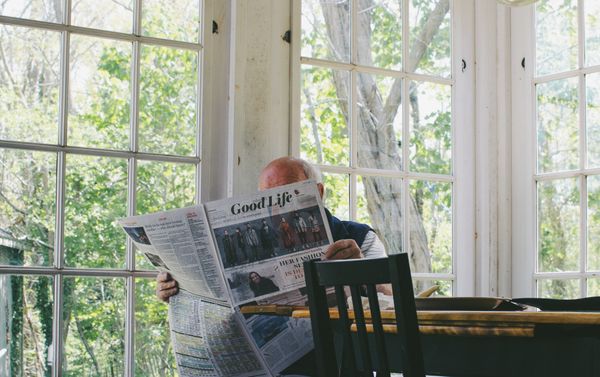 Expansion. There are two ways to accomplish it in the world of big business, and especially in the fast-moving world of high-tech that used to be solely represented by companies 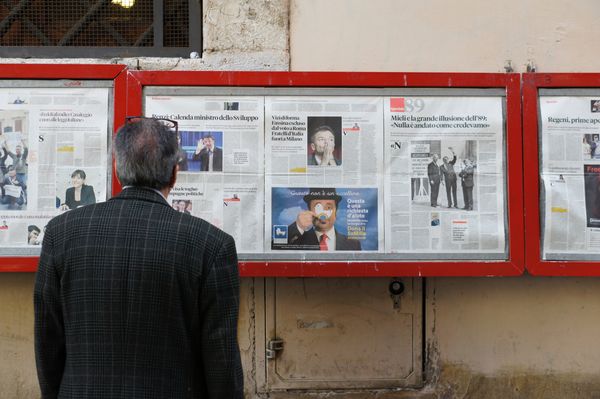 Like a household plant forgotten on the patio in the mild June rains, crypto is growing, and growing fast. It is now, once again, testing the air to see if