This post is a tale of the very early days of the internet, including my comparisons of the events back then and the cryptosphere space today.

It’s based on my own personal journey and is a true story. Let’s go back in time…

Some of us on these forums are old enough to remember the big bang of the first days of the internet, and I was lucky enough to be working as a technical network specialist in the very early days. This job started a few years before the public internet was available and I thought I would share my views on the similarities I now see repeating in this new space, and make a few comparisons to those old days.

First a bit of background - hang in there, it will hopefully all make some sense in the end

From about 1986 to 1992/93 I was worked as a network engineer for a “large international blue chip company”, initially working as a telephone voice engineer, then for a time in their network operations centre, but mostly as a LAN & IBM Mainframe network specialist.

This company is one of Ripple's most well known publicly announced customers, though that is not the point of this story.**

I was about 17 years old at the start and 23 when I left, moving on to start my own network consulting firm which I ran for the following 26 years. So I was young, fresh and able to suck up technical knowledge and details, and was very fortunate to have some amazing teachers and mentors.

We ran a huge global network, with many IBM communication controllers dotted around the world (these were the “routers” of the time) each supporting hundreds of links to remote sites providing connectivity to the mainframe applications used by tens of thousands of staff. At the time this was one of the biggest networks of its kind in the world.

In 1986 LAN technology was in its infancy, there were very few personal computers and those that existed had no network connectivity between them. PCs, memory and storage were incredibly costly at this point and floppy disks ruled the day. 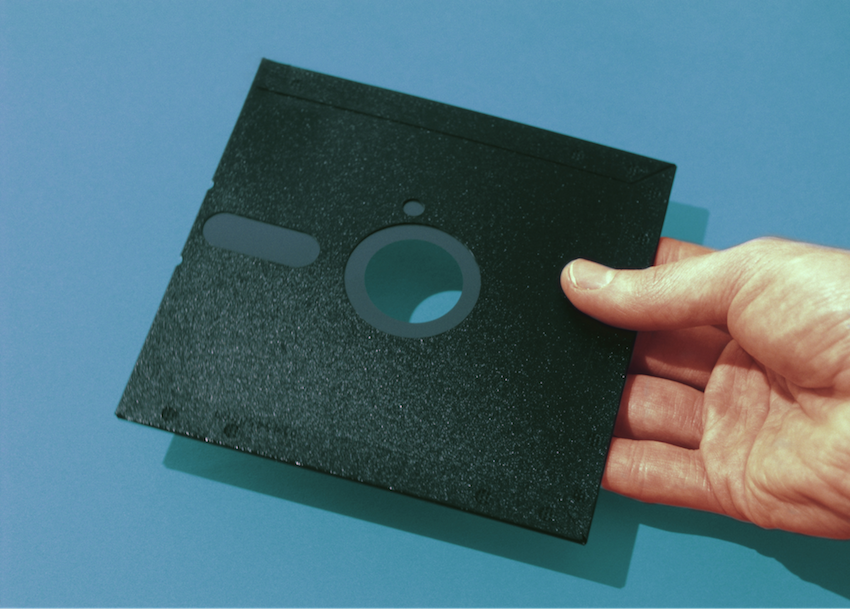 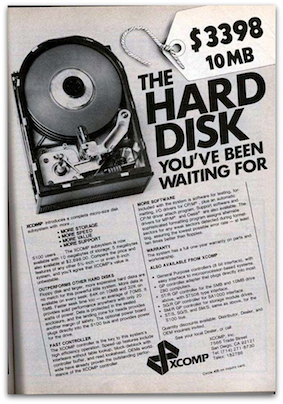 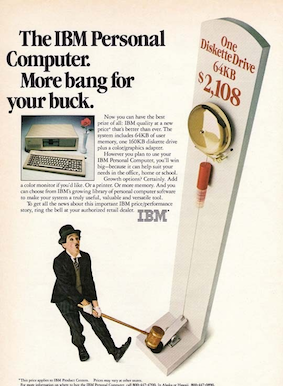 Real development in local area networks (LAN) started around the time I helped install the first token ring network (an early LAN architecture, superseded by "Ethernet"). Initially this connected a few IBM mainframe computers together at what we then considered to be mind-blowingly fast speeds (4Mbs).

At this time most links between systems were 9.6Kbps. We installed and monitored thousands of these links around the world, and a connection speed of 4Mbs was an order of magnitude faster than anything we’d had until then, and would later support concurrent connections for several thousand users over the new LANs that were soon to be installed. 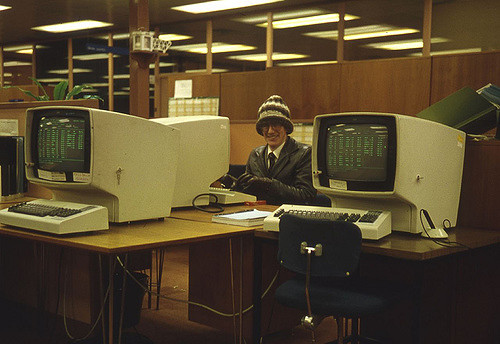 IBM 3270 consoles - and no, that is not me. I was far less stylish at this time (image via google)

A Myriad of "disparate" systems

Fast forward a year or two - the company had more than one IT group and each had quickly set up its own LAN infrastructure - we had soon had many more PC’s and several disconnected and differing LAN environments, some using IBM’s LAN protocols on token-ring networks, several using IPX (Novell's LAN protocol), others using DECnet (the DEC LAN protocol), these ran on slightly differing versions of the ethernet standard that we have now and each used slightly different hardware specs, most were unable to interoperate or communicate with each other and were connected on single switches, sometimes extended with repeaters and bridges. 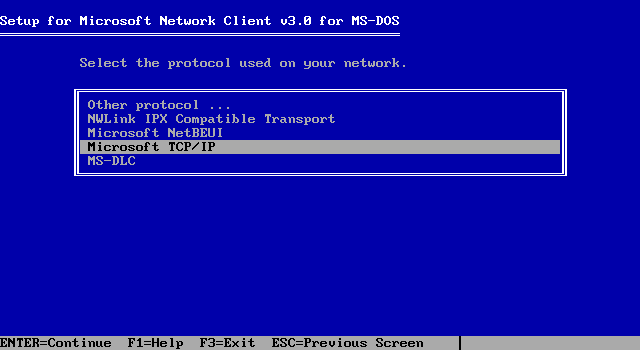 This technological battle between Ethernet and Token-ring raged for a few years, with Ethernet eventually winning due to its cost-effectiveness and cheap network cards. Token-ring was actually a much better deterministic protocol, and ethernet back then was wildly problematic but a fraction of the price compared to IBMs offering. A bit later new LAN switching technologies made the argument moot, Ethernet won the “layer-2 war”, and we still operate using its standards today on most physical mediums including wifi. Remember back then, this was brand new stuff.

The birth of the Internet - enter Cisco Systems.

Around 1987/88 I accepted a new position to help setup a test environment and evaluate a new company's first product - the Cisco Systems AGS, MGS and ASM routers. Cisco had around 20 staff in the USA and a few in the UK at this point 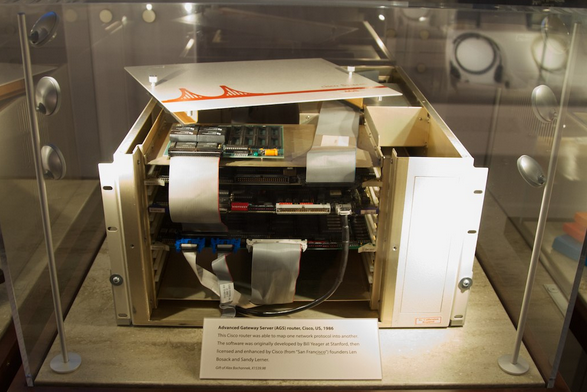 My employers were one of the venture capital investors for Cisco and we had received one pair of the earliest devices. I attended a week-long course which taught me how to physically assemble the device and program much of its functionality using dip switches and jumpers, then another weeks training on the software (Cisco IOS version 8.0). 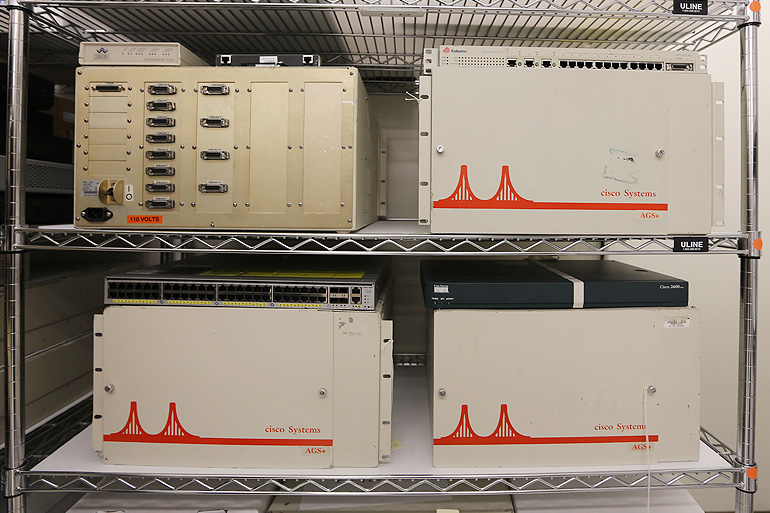 At this point there was no public internet, and we used a dial-up bulletin board to get news and download software updates from Cisco’s “CCO” system (at 9.6kbps), 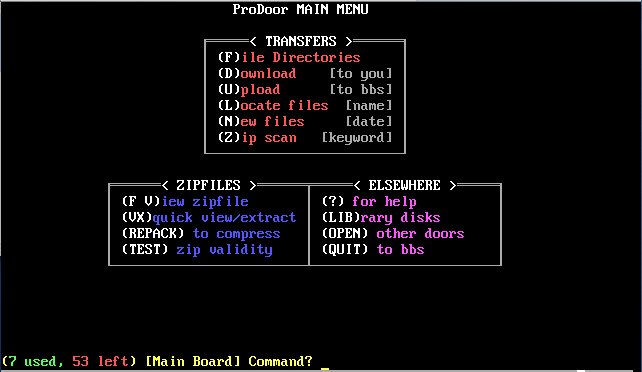 Old-school BBS bulletin board screen - this is not Cisco’s, but its similar (image via google)

This early Cisco software/hardware initially supported every protocol known to mankind, however connecting them to each other was difficult and in many cases impossible (though TCP/IP resolved this instantly), the devices were true multiple protocol routers, and certification for Cisco at this time meant learning the finest of details of all the protocols at packet/bit level.

“One protocol to rule them all”- TCP/IP.

At this point few people had heard of TCP/IP - its functionality was only used to enable the routers to interconnect and share routing information, and there were very few hosts using the TCP/IP stack. The first IP host I setup was an IBM network management system used to monitor the Cisco devices status and availability - I can still remember the first successful “ping” from this system to the routers. I’ve “pinged” a few hundred thousand more since then.

Over time I learnt this new protocol, and slowly started to realise that it would take over the world of internetworking.***

My employers various IT teams would meet discussing interoperability, management and standards, mostly arguing that their system/protocol was best, At the beginning, no one really took TCP/IP as a serious contender - the idea of "IP on everything" was laughed out of the door at the early meetings, but slowly the various manufacturers started adding the TCP/IP stack to their software, with eventually TCP/IP becoming the standard on all machines.

Our IP network quickly grew in size, the Cisco Router team expanded, and soon after the public internet as we know it came into being (via dial-up), and eventually TCP/IP ruled, as it does today. Interestingly, we had already then started to voice the worries of address space limits that led to IPV6 development. (One day maybe..haha)

To me, comparisons with Ripple and Cisco at the early stages seem obvious - they both had their future planned in detail several years before their total domination of the market. Ripple has the added advantage of having the first internet boom (and the 30+ years of its continued growth) to use as a reference of what worked and what failed.

"I watched the “Internet of information” explode back then (i.e. Cisco & TCP/IP) and I truly believe we are seeing it happen again now - only this time around it’s the “Internet of value” with Ripple and XRP."

Of course, I maybe be wrong - but feel free to show me the competition with anything resembling Ripples technology, leadership team, ethos and board member experience. Not to mention the community support :)

After more than 30 years working in network engineering and architecture for the biggest companies in the world, I'd grown bored of﻿ the technology and thought I had seen it all (actually several times over), now I'm excited again and convinced we are now seeing the next evolution of the internet unfold.

XRP and the Interledger are a big part of my revived technical passions. Coil/Codius could change the world with accessible smart contracts and Xspring will no doubt find use-cases we cannot even conceive of at the moment, but the blockchain technology in general will eventually enable so much more and should in time enrich the lives of everyone on this planet.

Do watch Don Tapscott’s TED talk for some great examples of the potential of blockchain, he presents it so much better than I ever could.

My former employer was (and continues to be) a very forward thinking company, always on the frontline of new developments in IT, evaluating the newest concepts and able to identify and utilise winning technologies to get new products into the market quicker than their competitors. This has kept them in business for over 100 years. Its been years since I last worked for them, but I have the fondest memories of my working life with them and many of my friends are still there running the show.

Them signing with Ripple so early on, gives me huge confidence that we are onto a winner.

Note - I have no information from them about their use of of Ripplenet, and would never ask for (or be given) insider info, so please don’t request more detail on who they were, or their future use plans - thanks.

I hope you enjoyed this little journey through time and space. 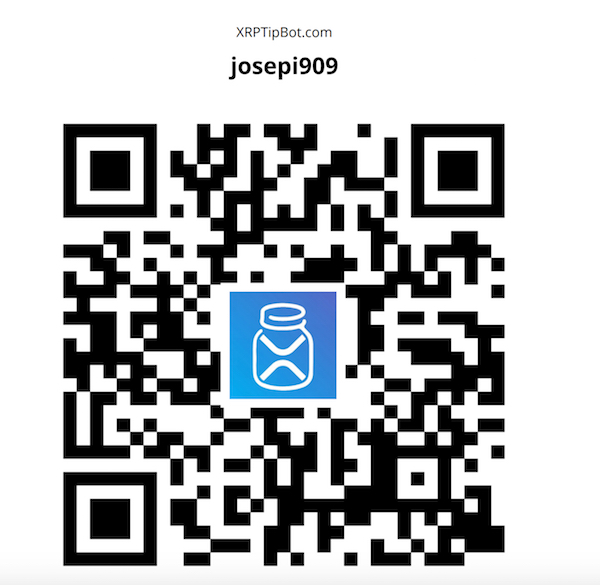 Fun fact - “When Moon ?” - these words must have first been used at Nasa in 1966, for the Saturn V rocket project, with its guidance being controlled by IBM 360 mainframes.**

*Disclaimer #1 : These are my own recollections and opinions, and are not financial advice - DYOR etc etc.)

*IETF - Internet Engineering Task Force - develops and promotes voluntary Internet standards, in particular the standards that comprise the Internet protocol suite (TCP/IP). It is an open standards organization, with no formal membership or membership requirements. All participants and managers are volunteers, though their work is usually funded by their employers or sponsors. 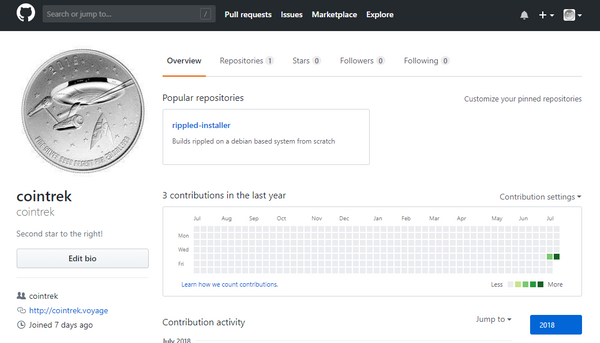 I cannot tell you how many times that I have build rippled from scratch making the howto in my last post; Rippled Developer Setup Guide. Also while testing the XRPine

Perhaps as many of you who also hold XRP, I am often on the lookout for information about it and Ripple both. I am on Twitter, where I follow a few who work at Ripple, and try to keep up with various company announcements