How does the Ripple Consensus Ledger Work with IOUs?

To answer that question, you first have to look at the concept of trust.  Right now, there are a large number of global exchanges where you can purchase or trade XRP.  In order to operate, the exchange will typically create their own credit on the RCL.  These credits are known as IOUs, because that's exactly what they are; a promise to pay the holder a specific value, whether it's another currency, asset, or even a service.

If you trade XRP for these IOUs, you are essentially "trusting" that the issuer of the IOU is going to redeem them for the specified currency.

The Ripple Consensus Ledger (RCL) is known as a "credit network" by university researchers, because it involves the issuing of credit for any security other than its native asset, XRP. 1  The RCL gives participants the ability to issue their own credit - for whatever reason, to represent any token of value that they want to issue.  The process is simple, and Ripple wanted to make it that way; within an XRP wallet, the user merely selects a few options and then they can "send" an IOU to a recipient wallet if that wallet trusts them. 2

What if your older parents and / or grandparents don't want to go through the KYC procedures on an exchange, but they still want to participate in buying and selling XRP?

You could do it for them, and then issue to their wallets specific IOUs in accordance with how much you owe them, thereby shielding them from onerous KYC procedures if they're just going to have you trade for them.  When they have your IOUs in their account, it becomes an irrevocable, cryptographic proof of how much actual money you owe them. 3 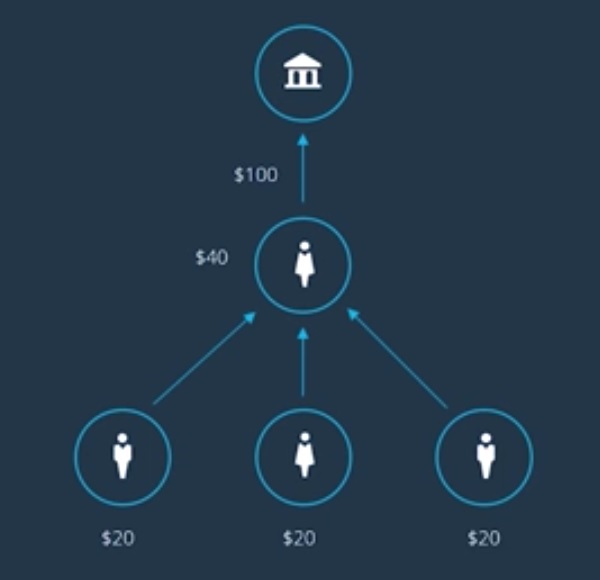 Imagine that you run a social media site and wish to issue tokens for every 100 page views that a blog entry receives.  Using the tokens on RCL, the blog writer could get a share of the advertising revenue.  You'd issue them as necessary, and then whoever has them could send them to you for redemption.

Now imagine that you are the owner of a small coffee shop.  You issue “cookie tokens” for repeat customers after 10 purchases.  Each token could be exchanged at your store for a coffee treat, similar to a low-tech punch-card system.

What if Amazon wishes to create redeemable gift certificates on the RCL?

What about other types of financial assets?  For those that are interested in the truly "big" numbers and possibilities, derivatives and other instruments are also trust-based and hence redeemable by issuing organizations.  This relationship lends itself to a tight integration with the RCL to track the securities' ownership.

The market for derivatives is super-massive.  Trading in derivatives dwarfs all other markets in terms of dollar value, with some analysts estimating that it is more than 10 times the size of the total world GDP. 4  This would be a comparable trade volume to other very high-frequency use cases for the RCL.

Credit for the Credit Network

Whether it’s a token to show social trust, a formal IOU that represents a debt, or a digital asset that represents ownership of a complex financial instrument, the RCL is capable of supporting it with the ease and simplicity of sending a token of your choice to a recipient wallet.

Ripple has made a decentralized credit network easy to understand for anybody who can understand just what a handshake represents.

Ripple is one of the few companies that actually "walks the talk" when it comes to engaging foreign markets.  The huge bank consortium that's planning on using Ripple technology - and potentially XRP - is based in Japan.  During one of the

Let’s Start by Comparing Leadership among the "Top Three" Unfortunately for its fans, everything about Bitcoin is decentralized.  There is no central authority that indicates where the influence of its impact should be invested.  Instead of one coherent strategy for legislative and regulatory