The first XRP Markets Report was provided to the public from Ripple on January 24rth, 2017.1  It’s target was the fourth quarter of 2016, and since then, three more reports have

been released by Miguel Vias, Ripple's Head of XRP Markets.  The latest one focusing on the third quarter of 2017 was released on Thursday, October 19th, one day after the SWELL conference ended.2

Importance of Transparency and Openness

The concept of decentralized, trust-less digital currency was a ground-breaking achievement.  The cryptography behind these concepts relies on a comforting set of mathematical principles.  This concept tends to be quite inspirational for developers, and as a result, the non-profit organizations that have sprung up to assist in education of crypto-currency users, enthusiasts, and investors also tend to mirror this decentralization.

Alas, what works well for a decentralized currency doesn’t work well for organizations.

Learning from the Failures of Others

The latest Bitcoin governance issues to tackle scaling highlight that weak central sponsorship of a digital asset can be detrimental to long-term maintenance of a technology.  While some would point to Bitcoin’s price as evidence of its success, keep in mind that the negative headlines about conflicts between the miners, businesses, and currency holders have been plentiful in 2017.  Not only is this indicative of a broken system of code governance, but it also served to bring to attention the absolute failure of Bitcoin to serve as a true enterprise-level digital asset.

While I focus mainly on the top three crypto-currencies, a lack of transparency in the sponsoring organization can substantially hinder investment in any digital asset.  In one notable recent example, the Iota network ceased to function for over 48 hours.

The development team behind Iota claimed that all of the full nodes agreed for the system to be shut down, but Iota critics complained that the network, valued at around $1 billion, seemed to be at the mercy of its developers with very little openness about the ongoing problem.3

The code governance process of Ethereum is one that seems very centralized around one figure; Vitalik Buterin.  While Vitalik Buterin seems to be able to champion any code

improvement that he deems worthy of the network, others have criticized this approach, saying that Ethereum essentially has a “benevolent dictator” in charge.4  Ethereum’s loosely-defined governance model may be effective for incubator projects or proofs of concept, but what about when a network is up and running, and in production?  What about when actual businesses and individuals are depending on it for moving money real-time?

Ripple is a US-based company based in San Francisco, California.  They are subject to US law, and as such, they strive to comply with all applicable AML and KYC regulations when it comes to doing business.  This includes all activities regarding any crypto-currency sales, and any interactions that they have with XRP markets.

While compliance with the law is important, there is more to the story.

Ripple has shown a history of forward thinking and big-picture analysis.  The one stroke of genius that seems to keep reaping rewards for them is their commitment to international standards.  Stefan Thomas and Evan Schwartz invented ILP as Ripple employees in 2015.  The original whitepaper can be found here:  https://interledger.org/interledger.pdf

Ripple had tough choices about resources to make at that time, and they purposefully chose to set aside Codius development to commit themselves to developing ILP first.  They did so with full knowledge that even competitors would be able to utilize these concepts to directly link up ledgers – any ledger – to other ledgers.  This meant that, potentially, their competition could link to banks just as easily as the XRP Ledger.

But Ripple knew that when the pie is bigger, it gets bigger for everyone.

This openness and transparency is an integral part of the Ripple DNA, and seeps into many other aspects of how Ripple conducts business and interacts with government, citizens, XRP investors, partners, and other stakeholders.

responsive and open than many other crypto-currency sponsoring organizations.  They hold Quora sessions to provide an opportunity for Q&A from XRP investors – directly with the CEO.6 They regularly log in and contribute on various social media platforms directly with XRP investors as well; Discord, Twitter, XRPChat, Reddit, and Bitcointalk just to name a few.

Their code is completely open-source.  While this is the industry standard, Ripple has never shied away from public scrutiny, and even released details of how they conducted their load testing of the XRP Ledger.7

This transparency extends to the XRP Markets Report, where Ripple provides consistent quarter-after-quarter updates about XRP sales and adoption, along with forecasts for the next quarter.

In reviewing the latest edition to the collection of XRP Markets Reports, I took the time to read each one of the four in existence, starting with the first one that targets quarter 4, 2016. 1 8 9 2 One of the consistent measurements that is reported in each are the statistics for sales using Ripple’s money transmitter service, known as “XRP II.”

XRP II’s role is to sell XRP directly.  They do this in two ways:

You might have known about the first part – it’s been discussed on forums before, and is understandably one of the more dissected parts of the supply equation.  Miguel Vias is careful to note in each of the XRP Market reports that each of these sales happens with re-sale restrictions; the purchasing of XRP should be considered an investment by whatever organization chooses to purchase it.

And it’s encouraging that this number has materially increased since it’s been officially tracked;

Notice how direct sales of XRP to large institutional investors has materially jumped along with the massive surge in interest in crypto-currencies generally.  This is a very good sign, and this additional capital has provided fuel for Ripple’s growth.

This is a number that I also watch closely.  Ripple has stated numerous times that they are committed to maintaining a healthy XRP market, and the numbers they provided here certainly support that claim.

If we look at the numbers that are reported for direct sales to retail investors, it looks something like this:

These are very low numbers, considering the massive amounts of XRP that are currently held by Ripple.

If you’ve been doing the math, you’re going to arrive at a very large number: $90.2 million in 2017 alone.  For one years’ worth of crypto-currency sales (thus far), that’s an enormous sum of money.

XRP sales, whether to institutional investors, or directly to retail investors, has provided an enormous sum of working capital for Ripple.  And they’ve been using that capital to expand and build the market that will eventually form a solid foundation for XRP’s future growth.  Some of these expansion efforts:

This is exactly what I wanted to see from Ripple in response to the opportunities and threats that exist in the crypto-currency space, and in the fintech space in general; an aggressive focus on meeting customer expectations, and for expanding their existing business and customer base through innovative and high-profile marketing.  Their activities have played on their strengths, and from what we’ve seen since 2012, this is a company that can deliver exceptional technical capability in a very short time frame.

I see no concerns in the numbers reported thus far for XRP II.

That being said, XRP retail investors should realize that our interests and Ripple’s interests are parallel in most matters, as long as a healthy XRP market is achieved.

But what constitutes a healthy market?  This is a matter open for debate, and certainly, some in the crypto community are not going to react well to quarter-over-quarter increasing basis points of XRP being sold by the company directly to retail investors.  This is exactly what XRP is criticized for by its competitors in the crypto space.  The amount is very small currently.  “.2 percent” of trade volume is not going to affect market price, but what if this number continues to grow?

Keep in mind that it’s not just the percent sold directly by Ripple that can affect the price.  It’s also just the raw concept of direct retail sales by the company.  (i.e., the publicity from such an activity)  This in itself may make some investors skittish, especially if they see quarter-over-quarter increases in the basis points of this activity.

In the very first XRP Markets Report targeting Q4, 2016, it was noted that:

“…in Q1 2017 we plan to offer qualified market participants the ability to borrow XRP. This will facilitate enhanced participation in XRP markets and will lead to deeper and more stable markets.”

And then most recently on October 19th:

“Unfortunately, our efforts around lending were more challenged. In the world of digital assets, the devil is in the details, and it turns out there are several considerations to account for when lending XRP. As a result, that initiative is taking a little longer than expected, but we expect to have it up and running in the middle of Q4.”

While I’m unsure, ultimately, what effect the delay in XRP borrowing will have on markets, Miguel Vias provided a positive confirmation 11 that it will not impact any component of the xRapid solution or its adoption:

Miguel has done a fantastic job in this latest edition of the XRP Markets Report of providing not just the raw data in a consistent format with previous quarters, but of providing some very value-added contextual information to the quarter 3 report.

And no wonder – so much happened in one quarter, that it’s tough to analyze all of the XRP price impacts.

Keep in mind that most of the news was quite detrimental to crypto prices – from Bitcoin governance issues tarnishing the entire industry, to China’s ban on crypto trading for the Renminbi (CNY).  However, with SWELL happening at the beginning of the fourth quarter, we are now looking at stable and increasing volume for XRP, despite late-breaking news of further Bitcoin governance issues (forks).

Miguel mentioned an expected increase in the amount of XRP II sales to institutional buyers in quarter 4, 2017.  This is an exciting development that may herald an ever-increasing amount of capital that will be flowing into Ripple as a result of XRP sales.  As Ripple expands and uses this capital for growth, the corresponding market and potential for XRP usage directly follows. 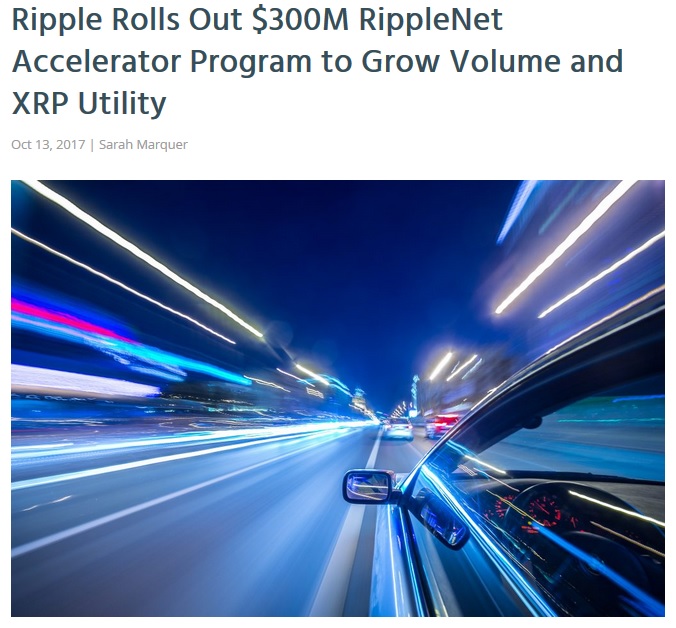 The RippleNet Accelerator Program serves to speed the adoption of XRP usage by banks and institutions by providing a reward, or bounty, to the first organizations that utilize it to transfer value.  This is an exciting program that all XRP investors were waiting for – a direct incentive for XRP usage by mainstream finance!

xRapid saw its first production usage in Q3 by a company called Cuallix10 that uses it to transfer value to Mexico across borders.  This exciting development is the first signal that xRapid is now considered a production-ready solution by Ripple.  As more and more companies utilize xRapid, it is my hope that the entire industry will start to wake up and smell the collective coffee, and understand just what XRP can do to lower their costs.

The future. If there's one thing that all securities traders want, its insight into future events, expectations, and probabilities.  If only we crypto traders could see the future, each of the many parabolic price leaps in the crypto space would be revealed, and we'd

The market doesn't lie. It's very apparent from the volume and price behavior in the crypto market that  investors in droves are transitioning much of their alt-coin portfolios into Bitcoin ahead of the fork(s). 1 Why is this? Well, several sources claim that