This blog contains a unique focus: We're purposefully not going to discuss the core use case for XRP in this blog entry; banks and financial institutions will use XRP to move value across borders - and that's why XRP was created!  In addition to its banking applications, however, XRP investors are also interested in retail use cases for XRP.

After all, in addition to being the most flexible, cryptographically-secured asset in the world, XRP is also a crypto-currency.  It can serve as a store of value like any other.

That means all of the use cases that we've come to expect from Bitcoin are also available to XRP.  Not only that, it's a much better store of value because of its performance metrics.  Transactions can be processed with blazing speed - all payments settle in less than four seconds,1 no matter what part of the world you're in, or if you have to convert currencies to do it.

Let's start by widening our lens out to the entire crypto landscape.

I keep learning about amazing new developments each day in the crypto universe; mainstream adoption is starting to edge its way across the world's radar screen.  XRP investors have a lot to be excited about in the coming months.

We'll get to those, but first let's cover some developments that you might not know about already.

This reminds me of one of those old comic books where two different super-heroes join forces to confront a formidable villain.  When Mozilla, Google, Apple (via their Webkit), Microsoft, and Facebook team up on ... anything... it turns heads; a lot of heads! 2

And just what are they teaming up on?  A browser extension to handle web payment requests from online vendors.  The W3C working specification is located here if you're interested in reading the details.  Here is the abstract:

Before you jump to the conclusion that these corporations will know your private keys, keep in mind that no code has been written yet to integrate with these browser APIs - and they are generic in nature; any payment source can be used, including a debit card, a credit card... or something else!  The generic nature of the API is what is so exciting to developers.

Will this extension work with crypto wallets?  Yes.  It will work with any "source of payment" that a developer can code.  One of the prominent leaders of the W3C standard for browser payment APIs is Ian Jacobs.  He was recently quoted3 as saying:

"This is a great opportunity for people to start writing blockchain-based payment method descriptions and to try to test the API. That's sort of the period that we're in, the test and interoperability development phase."

This means that all crypto payment choices can potentially benefit - including XRP!

A Warning From Adrian Hope-Bailie

Adrian Hope-Bailie, from Ripple, has been working with the W3C group for multiple years, and issued a warning that the new standard is not set in stone, and that to support crypto appropriately it will need the feedback and support of the blockchain development community.

He talks about these challenges further in his own blog on Medium.

You Can Already Use XRP to Buy ... Stuff

Back a couple months ago, I wrote a blog complaining that I'd like to buy beer with my XRP.  I used the blog entry as an opportunity to highlight the opportunity for developers to build end-user applications that integrate with the XRP Ledger.  It was (and is) a worthy goal, but a reader was quick to point out the error of my ways - you can already use XRP to purchase things at online vendors all over the world, using a list at www.coinpayments.net

For those of you that already knew about coinpayments, kudos; but for me, it was a breakthrough moment when I realized that now I had a new opportunity to tell those people in my close circle that own XRP, that there is a way to use their stash besides as an investment.

Here's a sampling of just how big the vendor list is 4 on coinpayments:

Now lets switch gears; have you ever looked at your own XRP wallet and wondered, maybe a little voyeuristic, about how much XRP other people have purchased?  (Or received, if they're lucky enough)  Well, recently some XRP developers ran an algorithm 5 to survey the XRP Ledger and retrieve that information.

Although we don't have any names to go with these wallets, it's fun to imagine whose they might be.

The first chart, to me anyway, clearly indicates that XRP is being used for investment: 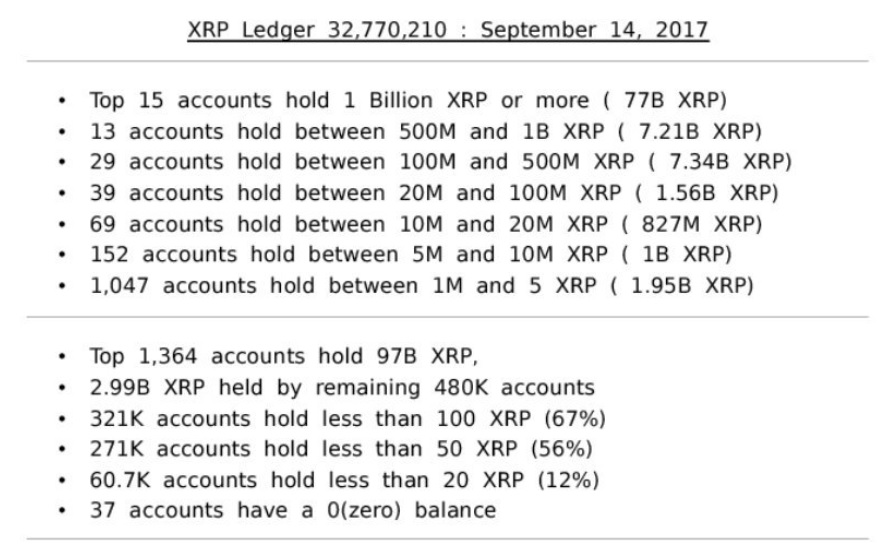 Are you part of the exclusive XRP "one-percent?" To qualify as a member of this category, the XRP owner must own more than 201,553 XRP.  At today's 6 XRP rates, that amounts to approximately $37,500 roughly.

If you are not in the "one percent" club, don't feel bad - you have a lot of company!  Most ordinary crypto investors are holding sums of XRP between 0 and 100,000.  These wallets are clearly serving as a hedge against other crypto investments, and allow owners to share in the success of XRP. 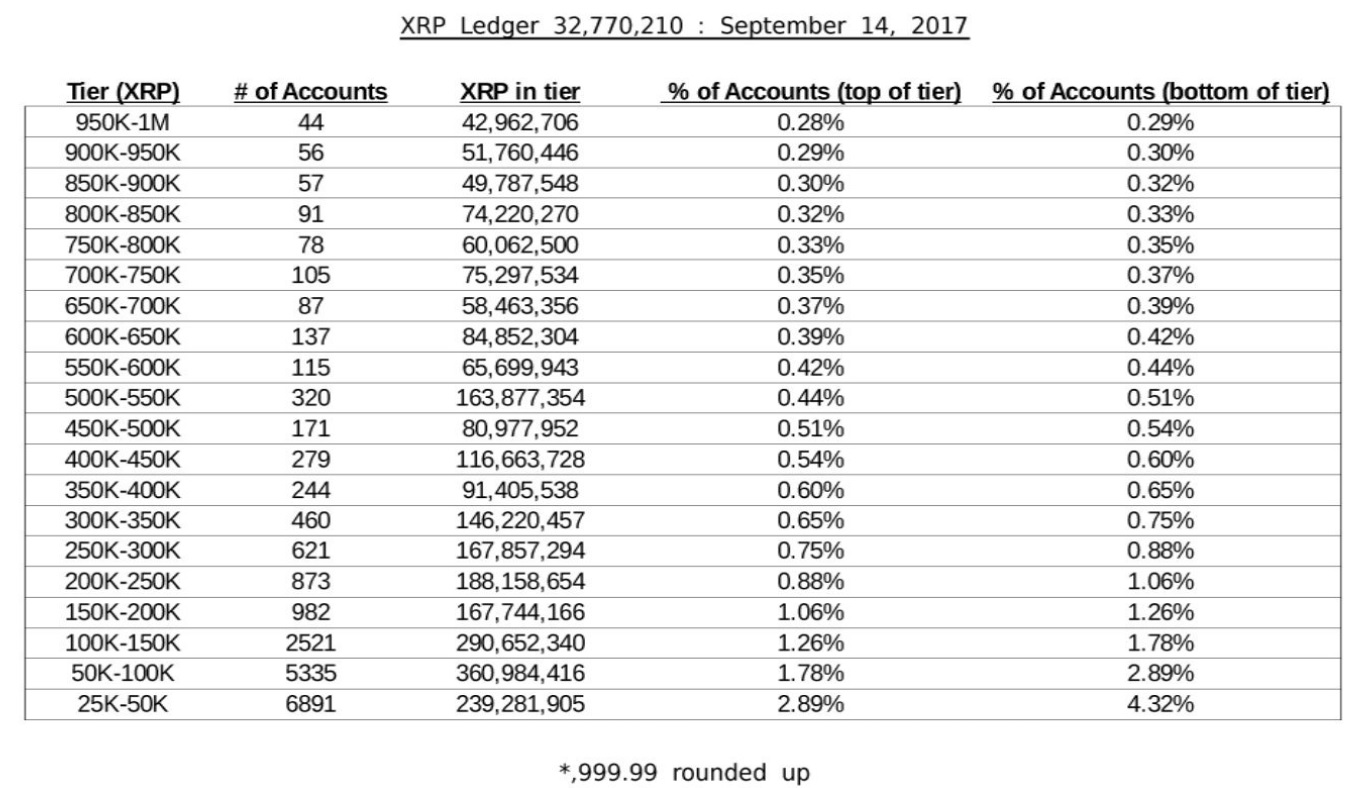 I know where my own wallet stands in relation to these lists, and I wish it ranked much higher!

Setting aside personal jealousy, the reason I threw these numbers out is to demonstrate the sheer number of wallets and how they're being used.

I reported a "total wallets" number in the comparison to Ethereum and Bitcoin in my prior comparative blog, but keep in mind that when a user creates an XRP wallet, they are making a personal commitment - it takes XRP to establish a wallet on the network - this is one way that the XRP Ledger cuts down on spam wallets and accounts; it's a feature not offered by Bitcoin or Ethereum.

We'll keep these wallet distribution numbers in mind as we move forward into late September and early October.  Speaking of October, we should probably do another checkpoint like this after the SWELL conference!

What does XRP have that no other crypto-currency has?

Well, a lot of things.  For starters, it's performance metrics are best-of-breed, and lead the pack in every measurable category 7 (for a crypto-currency):

On top of that impressive list, XRP also has a US Company standing behind it: Ripple.  And that company has planned a technology conference to compliment SWIFT's SIBOS conference at the exact same time (and in the same city - Toronto).  Most of you already know about SWELL, but you may not know that Ripple recently added to their impressive list of keynote speakers.  Previously, Ripple had announced Dr. Ben Bernanke and Sir Tim Berners-Lee; now they've added Don Tapscott to that list, the CEO of the Tapscott Group. 10 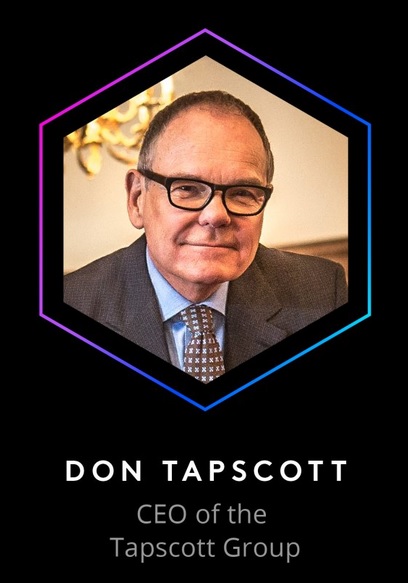 Don Tapscott is one of the most influential management writers in the world, and the author of Blockchain Revolution: How the Technology Underlying Bitcoin is Changing Business, Money and the World.

Ripple also updated the SWELL site with many more details about the conference and speakers: https://swell.ripple.com/

The SWELL conference serves to mark Ripple's stake in the banking sector in dramatic fashion, and it will do well to take another look at XRP retail adoption progress after the conference completes, to see just how much the ecosystem has expanded as a result of the wide media coverage that SWELL will generate.

The XRP lockup is happening as well, "by the end of 2017" according to Ripple,11 and that event will also generate a significant amount of market buzz, as Banks and FIs - as well as private investment funds - will be forced to go to the same retail XRP markets where "ordinary" XRP investors are waiting.

With the spotlight so firmly on XRP, the next wave of crypto adoption will sweep many newcomers into the "swelling" XRP family!

I know you.  Or at least, I think I do... If you are like me, you are a crypto investor or developer.  Getting reliable, well-researched news about crypto adoption has never been easy.  We don't have any equivalent to "CNBC" for crypto,

What Is A Micropayment?   Let's begin in August: In relation to the Segwit code updates for Bitcoin, a user attempted to demonstrate how Bitcoin could be used for a small purchase. 1 They decided to use Bitcoin at a local coffee shop and the