A company that has a lot of liquidity doesn't need money; or do they? the world, the cryptocurrency industry, the XRPCommunity were fed with the following tweet: 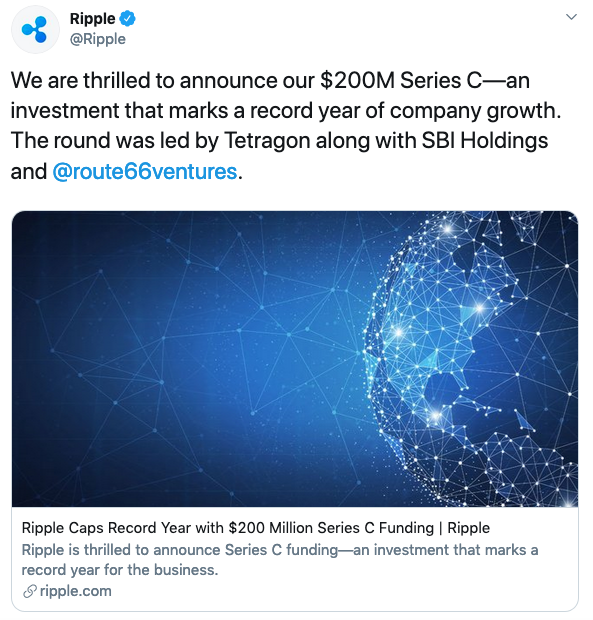 Why does a company with a lot of money need ... money ... Why a Series C and why 200 million dollars ?!?!? The round was led by Tetragon together with SBI, well-known by the XRPCommunity, and @route66ventures.

A lot rumours, everybody "knows" what is happening ... but what is happening. What is a Series C investment round. Let's take a look at all the different Series Fundings and let's discuss what a funding could be for

Alhough the market is still very young, read industry, Ripple is not unknown in the financial market. Bitcoin, you can think of it what you want, started this all and because of the scarcity it is a cryptocurrency that needs to be looked at. Looking at its flaws, as it is, it will not be the coin to take over the (inter) national transaction industry. A max of 21 million coins, probably 5 million are gone forever, 16 million coins are NOT enough coins to stay at the low price where it sits at the moment. For me that is a Supply and Demand situation and with / without flaws it will stick around for a little longer ... It's use case, although a lot would like to say none are buying / selling other cryptocurrency and you can use it for products in that "REAL" world out there ... pizza ... It became clear though that use case becomes more and more importantant ... no use case, no future for a lot of coins/ tokens ... according to even Brad Garlinghouse ...

Continueing on Ripple in the Financial Market; you can be pro, you can be against, but that they have a use case, are making steps, are used (I am talking about software here), is a reason for businesses to liaise with the Californian based crypto company.

Funding, why and how does that work? Potential Investors, at particular moments look at companies and rate them on particular points: Where does the company stand, what has the management team done in the last year(s), agenda, what has been done, have deadlines been met, market size and of course risk ... Does the company have a selling product and where does this product stand in the world it sells to. Does it actually have a market ... and do they have market share ! ! !

Besides these these, businesses can choose to do Series A, B and / or C funding rounds:

Doing a Series A funding, you start with an accelerator. An accelerator takes a set amount of seed equity from a number of young startups in exchange for capital and mentorship. An Accelerator looks at track record and helps a business taking the right steps. The companies strategy and "magic" is very important and is the succes factor of the funding. "The money", funding comes often from traditional venture capital firms, like Sequoia, Benchmark, Greylock, and Accel. Single investors may be interesting, "anchors" , but most of the time additional investors are looked for. Angel investors are also a group of investors, that are active in this kind of Series Funding, but most of the time, the amounts are already too high...

Series B rounds also take companies to a next level, but more money is involved. The company has been developed, a strategy has been determined and the (short) future is very clear !!! Success is a definite and allows the company to talk to "the bigger investors". More money is needed to head the company in the direction it wants to move into.
Companies undergoing a Series B funding round are well known in the industry and are taking the step, it is the airplane that flies around that famous "point of no return", it is GO time!!! The valuation of the company is between 20 and 75 million dollars.

Success has been a key factor and a new funding round is available. New products need to be introduced/ developed and that is why money is needed !!!
Investors are in it, to win it. 100% profit is, most of the times, a minimum, when looking at the potential of the investment. Scaling the company, fast growth are synonyms for Series C Funding.

There are three reasons why a Series C Funding is done:

Acquisition could be one of the reasons to go through a Series C funding. The traditional approach, gaining market share may not go fast enough, so Series C Funding is used. Money is needed to acquire competitors or key players to move faster than without the acquisition.

To be acquired ... It may be a way to show businesses or interesting parties that the company is healthy and would be a good investment ... to be bought. It may be toooooo early for this option ...

Another reason why companies go through Series C funding is to boost their valuation in anticipation of an IPO. An IPO is an initial public offering, a stock market launch, for example, is an offering in which company sharesare sold to institutional investors and usually retail investors.

Series C Funding, what do we know ... Acquisition or IPO ..

Ripple's Series C Funding is 200 million dollars, what is very high. It was led by Tetragon with participation from SBI Holdings and Route 66 Ventures. These notable investors not only underscore Ripple’s long-term potential, but as partners, they offer invaluable industry insight and expertise to help Ripple’s business grow on a global scale. Looking at track record: more than 300 customers worldwide including the heavyweight partner MoneyGram.

So what will happen: Acquire, be Acquired or IPO.

This section is going to be an IMO , my OWN opinion:

Looking back at the earlier investment rounds, Ripple has had 13 Funding rounds, angel funding, seed funding, multiple Series A and B Funding. In total, what is publically known, Ripple has raised 121,6 Million Dollars in those 13 rounds.

Not in this order, maybe not all of them, maybe others, but Ripple is not only (inter)national payments. The DeFi industry has awoken the XRPCommunity, the Crypto Market and it is a big industry. Tokenizing all traditional financial vehicles, it is a world on its own and Ripple wants to play a role in it. We hear DeFi all around us;
Acquiring Logos, the decentralized payments platform, by Xpring, was a first clear sign; derivatives, loans, futures and forwards will be given more attention.

If you wonder why XRP needs "money", for such a rich Company, getting a Series C Funding, I see it a little different. Yes, they have money, but the money is more into digital assets ... XRP. If they would use those for an aquisition, the XRP, need to be sold, if money needs to go from Ripple to somebody else. That is selling a lot of XRP, not good for the price of it. Not sure if all the banks and financial institutions would like this... And we are absolutely not there yet...

There are still a lot of players out that in Payment have not made all the important decisions. They may have everything in place, but saving money is still a wanted part ... X R P !!!

We have not seen anything yet and when the United States makes up their mind ... regulate the industry, oh boy .... let's brace ourselves.

The story goes around we are getting close seeing regulation of the industry with the "Crypto-Currency Act of 2020" but we will see. Regulating it is one thing, classifying all the crypto projects is the next.

I do stick with my SAYING:

XRP is the best kept secret in the wide-open ! ! !

If you have bought XRP at the end of December 2017, January 2018, chances are part of your XRP holding is still under water, if you would sell this moment.

Last week a friend went on a business trip to New York .... told her we were able to exchange some dollars, laying around in the house. She traded her Euros