Mention Bitcoin to anybody in traditional financial circles, and you will see it.

An immediate furrowing of the brow, a downturn scowl that reveals both inward doubts - and fears - of a potentially valuable investment opportunity that has too much baggage.  In the United States, traditional investors subscribe to the wise sayings of industry gurus like Warren Buffett:

“If you aren’t willing to own a stock for ten years, don’t even think about owning it for ten minutes”

And that's the challenge that the entire crypto-currency industry has been faced with in the West.  Unlike how traditional investors in Japan and South Korea have embraced the opportunities that new alternative crypto-currencies have created, investors in the West - the United States, Europe, and even South America - have not been quick to embrace it.

One of the first use cases that Bitcoin served was to operate as a pseudo-anonymous digital currency for criminals on Silk Road, a web site for exchanging illegal goods.  It was used to facilitate the purchase of drugs, weapons, and other illicit material before it was shut down and its founder arrested. 1

This early history happened to Bitcoin just prior to it's major global reach started taking shape, and its corresponding publicity happened mainly in English-speaking countries.  The press coverage was not kind.  From Wired magazine to mainstream news sources, the press painted crypto-currency with the same broad brushstrokes that they used to characterize Silk Road.

Who Would be Associated with Bitcoin?

As a result, here's the way that traditional Western investors now looked at Bitcoin:

"If you believe in Bitcoin, why, you must by association believe in the very things that you could purchase with it, right?  Maybe you were one of those crazed anarchists that want to destroy society?  If you believe in crypto-currency in general, that's even worse.  The very sound of the name as it rolls off the tongue invites notions of secrecy, deception, deceitfulness, and anarchy!"

Try it; say "crypto."  It doesn't have a nice connotation in English, does it?

And so the road to mainstream investor acceptance in the West has been paved with difficulty.

And then Ripple Happened

For starters, Ripple is a US company, founded in late 2012.

It's a (currently) private company whose investors include names that are familiar - and respectable - to many in traditional investment circles:  Google, Andreessen-Horowitz, Seagate Technology, IDG Capital Partners, Accenture and SBI Holdings, among others. 2

Ripple wants to work with banks, not against them.

This was a new notion for crypto-currency in the West.  Until Ripple was created, the fans at Bitcointalk (the largest Bitcoin forum in the West) were seemingly comprised of crypto-anarchists who hated the government and traditional banks.

And they hated Ripple for this reason!  They even created websites dedicated solely to slandering everything that the company released - making up lies about anything was not outside the realm of possibility.  It took years for XRP investors and fans to counter each lie one-by-one and change the nature of the dialogue in the West.

The constant public relations war that bitcoin maximalists still wage against Ripple has not completely subsided.  Recently, David Schwartz - Chief Cryptographer for Ripple - found himself having to confront intentional misinformation that was masquerading as an op-ed on a respected crypto-currency news site. 3

Ripple created XRP, which was faster and better in every category of performance.

I won't talk for this one - the graphics 4 say it best:

Ripple created the Interledger Protocol (ILP) to connect all ledgers together.

Even though it benefited everybody (and even Ripple's competitors use it), Ripple decided to champion the creation of something known as the Interledger Protocol, or ILP. 5 Why would they do this if it potentially benefited other crypto-currencies and potential competitors?  Because they walk the talk.  David Schwartz has mentioned the goal of the XRP Ledger to "create a bigger pie for everybody" and he means it.

Stefan Thomas and Evan Schwartz from Ripple released their famous ILP whitepaper in October of 2015. 6

Ripple did the hard work of educating bank executives and technologists.

Almost every other crypto-currency has a non-profit foundation that relies on the kindness of its miners and users for donations.  Bitcoin has the Bitcoin Foundation.  Ethereum likewise.  But not XRP.  XRP has Ripple, which is a private US Company.

This is an advantage.  Those nonprofit foundations I mentioned?  They don't have a large staff of developers or business-people, or even industry experts or active lobbyists.  Not so with Ripple.  It is comprised of the best that Silicon Valley has to offer, and has been named one of the leading fintech companies time and again annually by Fortune magazine, MIT and other organizations. 7 8

Right now that company numbers over 200 people and they're hiring as we speak to establish a new presence in China! 9

The company has not shied away from doing the difficult work of bank adoption.  Methodically, they have built a customer base that now numbers more than 90 banks and financial institutions, comprised of many of the "top 100" banks in the world. 10

How Could Ripple Become the Largest Fintech Company?

XRP is the digital asset that Ripple created when they created the XRP Ledger.  It serves as a no-counter-party digital asset just like Bitcoin or Ethereum.

Ripple has discussed at length about their intended usage of XRP.  The main use that the company intends for XRP is to serve as liquidity while bridging one fiat currency to another for banks.  This idea would generally replace the entire notion of "nostro" accounts for both banks and financial institutions, as well as for large companies that do worldwide business. 12

This concept, along with it's projected cost savings, are described in Ripple's solution guide here, among other places.

Unlike those other nonprofit foundations I mentioned previously, Ripple has an enormous war chest of XRP to bootstrap liquidity while supercharging worldwide bank adoption.

None of the other crypto-currencies have this ability to provide their own liquidity.  While some have been gifted a small amount of their network's tokens, the sums are usually far too small to do anything but fund small development or promotion activities.  And none have the ability to promote bank adoption with their foundation nest eggs.  Not so with Ripple.

Banking's new preferred digital asset - backed by a US company.

This is the part that scares away "typical" crypto investors in the West, but attracts them in the East.  I've explained the difference in composition between the two camps, and the reasons for it.  In the West, the crypto-anarchists that form the core of today's crypto investors do not like anything that even remotely smacks of bank cooperation or a technology that bows to regulation and governmental oversight.

In Japan, South Korea, and China, however, this is viewed as a strong point.  Ripple is a respected US Company, and the traditional investors in the East who are pouring capital into crypto-currencies view this as consistent with their view that an innovative product should have a strong company behind it.

You can see this in XRP's volume.  The great majority of XRP's daily volume is from the East, not the West. 13 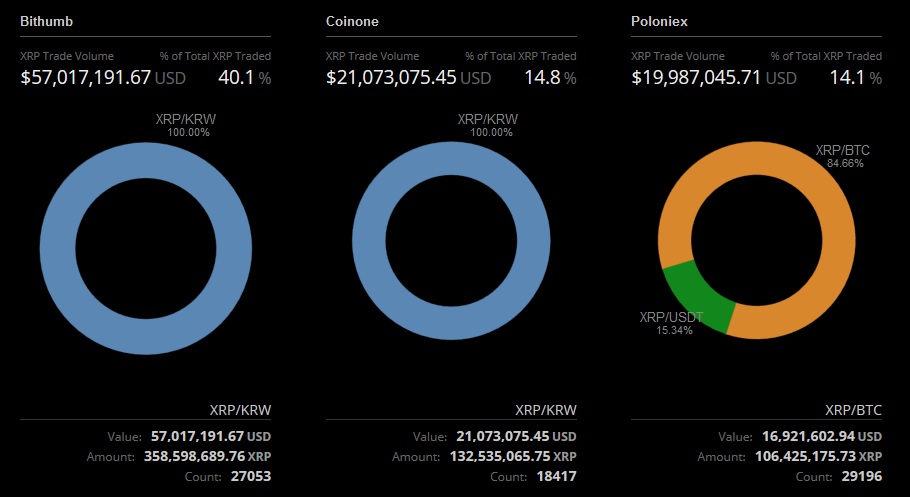 These eastern countries see XRP for what it is: the product of a respected, large, and growing company whose technology banks are adopting.  They understand the importance of Ripple opening a new office in China.  They understand the importance of a Japanese banking consortium using Ripple technology - a banking consortium that comprises over 80% of all banking assets in Japan. 14

Ripple has acknowledged that much of their long-term business model is tied to the value of their network's digital asset, which implies that they also understand that eventually this digital asset will be sold.  Any sale of XRP by the company would increase the market's supply.  In theory, this move could drive down the price of XRP.

In response to this market concern, Ripple decided to lock up their XRP in an impenetrable "escrow" - a feature of the XRP Ledger where XRP can be locked away for a specific time period.

Starting in 2017 (this year), 55 billion XRP will be locked away for 55 months (4.5 years).  Each month, the escrow will release 1 billion XRP.  Ripple will then have access to this XRP.  Keep in mind that, on average, Ripple has sold only ~ 300 million XRP per month to financial institutions.  They will then place any unused portion back into escrow for another 55 months. 15 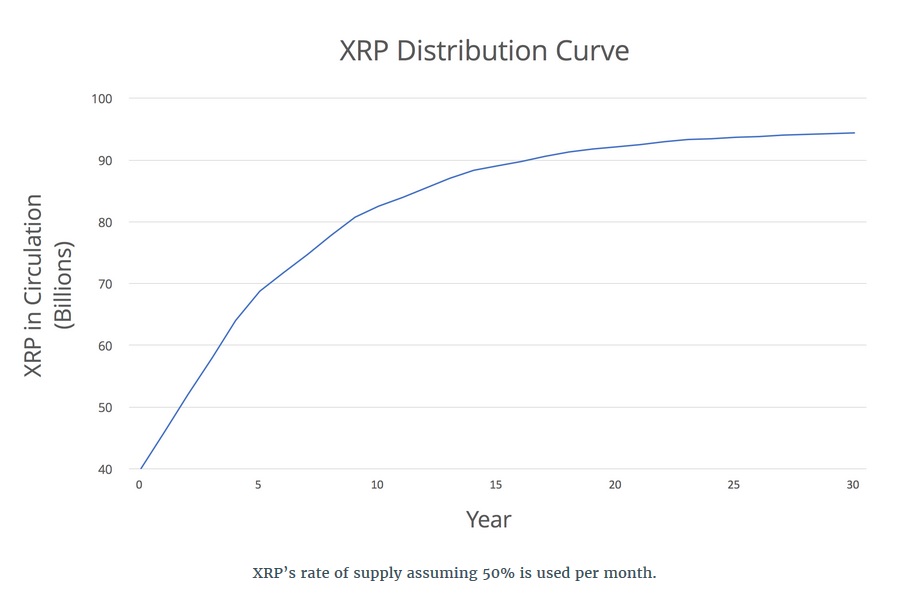 This results in a distribution curve that is estimated to take over 30 years to complete.  The escrow ensures a gradual release of XRP into the market over time.

Remember that it's an asset.

Despite the lockup, XRP will remain an asset on Ripple's accounts, and this makes it very attractive to investors in the company.  Because of the size of this asset, the current worth of Ripple (the company) will necessarily include the current market value of the token, multiplied by its holdings.

This results in a spectacular number currently:  ~ 9.6 billion dollars.

While this market capitalization doesn't approach the market capitalization of some other noted technology stocks currently listed on Nasdaq, it provides an example of things to come and the real possibilities that could be down the road for XRP - purely because its "foundation" is not a foundation - it's a US-based company that has a lot of options.

Going public?  Maybe.  Being bought by Google?  Maybe.  Staying independent as it takes over banking payment rails from SWIFT?  Maybe that too.

Those are some pretty strong "maybe" points.  "Maybe" you should add XRP to your portfolio?

I'm not talking about the color of money;  I'm talking about the environment! My point - and potential investors don't seem to realize this fact - XRP doesn't require wasteful mining to secure its network like Bitcoin.  Proof of Work (Or "P.O.

The crypto-currency market is fickle about where the "fast money" flows. And we've seen where that fast money is flowing recently, with almost all of the "alt coins" - the derogatory term given to anything not Bitcoin - suffering in