First of all, what do we mean when we say "market capitalization" for a crypto-currency or digital asset like XRP?  In crypto circles, market capitalization is measured much the same as it is for wall street stock symbols - the outstanding units multiplied by the market price.

In regards to XRP - Ripple's digital asset, I'm resisting my very strong temptation to pontificate about the past... because the past is so fascinating!  Instead, all we need is a baseline.  Let's take a look at the overall numbers.  1

So Where is XRP Now?

The share of the pie that's been taken from Bitcoin is considerable.  Yesterday's numbers show what cannot be denied, even by the staunchest of Bitcoin fanatics: Bitcoin's market share is declining, and the rise of its replacements has begun.  XRP will eventually take the lion's share with its use cases, but Ethereum has temporarily captured the attention of the short-term speculators in their search for quick profits from initial coin offerings (ICOs). 2

The most conservative estimate that I can provide - and one that I firmly believe is not correct because it's too conservative - is based on the assumption that the per-day growth that has taken place on average since January 1 will continue at the same average daily rate.  This is very conservative, because we've only seen this rate increase when measured over any significant time frame.  However, let's continue this charade, and see where the most conservative, linear-only speculation lands us:

Who Wants to be a Millionaire?

Before you scoff at even the conservative linear scenarios I outline above (it implies a doubling of the price of both XRP and Ethereum), consider the fact that even mainstream, respected journalists have indicated that crypto-currencies are not in a bubble, and that we are seeing a case of large-scale capital investment that has yet to see its plateau. 3

Where is my true estimate of the value of XRP, Ethereum, and Bitcoin?  To answer that question, you need to look at the current state of where market capitalization puts us in relative size with other assets and asset classes.  This blog post is all about the eye candy, so I won't stop now.

Here is a very telling graphic about just how "young" our market is in terms of innovation adoption.  Where do you think we should be in this graphic, and now compare that to where we actually are at present day. 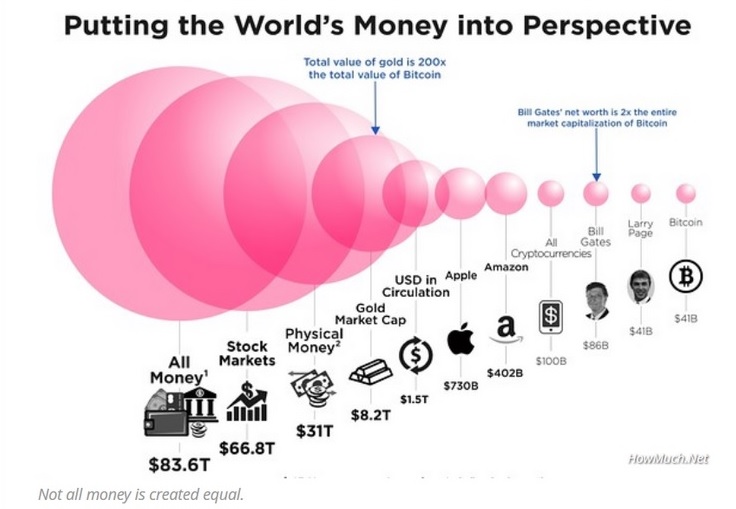 We are still quite early on the innovation adoption curve, and I believe that the market will catch up to us by a huge percentage in the last half of 2017.  XRP will be valued at over $1, but I don't have any greater sense of where things will shake out.  I foresee Bitcoin continuing to climb, unbelievably, even into 2018.  It's just got too much momentum behind it, even now. 5

My gut feeling is that while XRP will continue along with this "linear" model beneath it, there will be periods of parabolic price movements that will take us higher - possibly much higher.  What would cause a parabolic shift in price?  It could be the company's impending XRP supply lockup 6, it could be a pivotal moment at an industry workshop 7.  It could be even more exchanges adding XRP to their list 8.  It could be more than 70 banks and ForEx businesses using Ripple technology 9.  Any number of these scenarios, or even just one, is enough to push XRP much higher than this linear estimate.  In fact, it's well within the realm of possibility that a 1-2 dollar estimate of XRP by year-end might seem positively conservative in hindsight once we reach that point in time.

Let’s set aside the question of “when” for a moment.  Now the question is, how much are you comfortable buying before that happens?

Ripple is one of the few companies that actually "walks the talk" when it comes to engaging foreign markets.  The huge bank consortium that's planning on using Ripple technology - and potentially XRP - is based in Japan.  During one of the